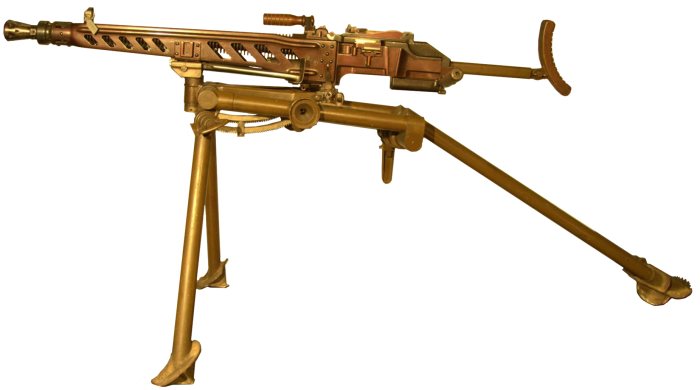 It must be pointed out that ZB-50 can be properly described as the “universal” or “general purpose” machine gun rather than “rifle caliber heavy machine gun”, because it was designed for use either from tripod (in “heavy” or AA role) or from integral bipod (in “light” role).

ZB-50 machine gun is short recoil operated weapon that fires from open bolt. It uses vertically tilting bolt locking and a lever-type bolt accelerator, which transfers barrel recoil energy to the bolt carrier, improving reliability of the weapon. ZB-50 machine gun uses air-cooled, quick-detachable barrel with radial fins and folding carrying handle. Barrel jacket is open at the top to facilitate rapid barrel change and better air cooling. Gun is belt fed, using non-disintegrating steel belts with open pockets. Feed is of push-through type. Belt is fed to the gun from the right side. Firing controls include two folding horizontal grips, attached to the trigger unit, with thumb trigger in the middle. To charge the gun, operator must unlock the trigger unit and push it all the way forward, so its sear would engage the bolt carrier. Once bolt carrier is engaged by the sear, trigger unit must be pulled all the way back and locked there, bringing the bolt group along with it to compress main spring. ZB-50 machine gun can be used from ZB-made infantry tripod mount (with optional AA adapter), or from integral folding bipod, attached to the barrel jacket. To provide better control when firing from AA adapter or bipod, gun is provided with sliding (telescoped) shoulder stock.