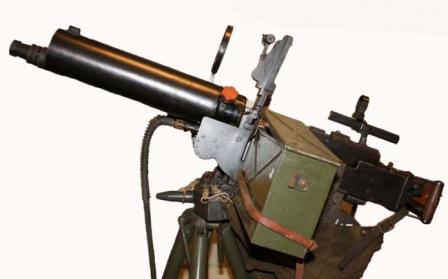 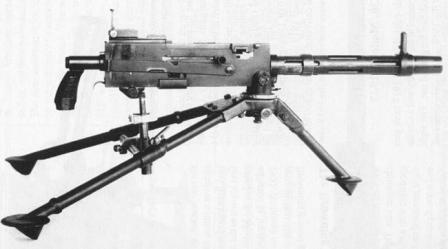 Browning M1919A2machine gun, as used by US Cavalry after WW1.

Browning M1919A4 machine gunon M2 tripod, standard MG of US armed forces through the WW2 and Korea,right side. 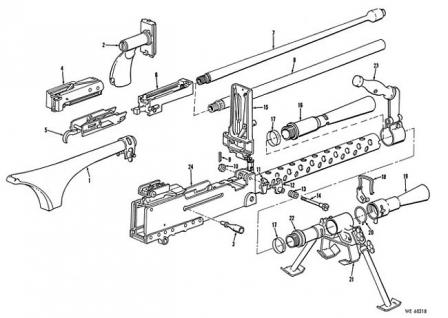 Illustration of theBrowning locking system as used in M1917 and M1919 machine guns.

The USA entered the Great War in its late stages in 1917, with very small inventory of mostly obsolete machine guns. Therefore, US soldirs in Europe had to borrow machine guns from their French allies. A new heavy (medium by modern standards) machine gun was required, and it was promptly delivered by American gun genius John Browning. In 1917, after informat but impressive test firing on Capitol heights, a heavy machine gun (actually an improvement over Browning’s own design of 1901), was put through more thorough tests by the US Army, which it passed with flying colours. The first prototype to be submitted fired twenty thousand rounds without any malfunction or part breakage – an astonishing achievement even by modern standards. To strengthen its claims, Browning submitted a second prototype which displayed similar excellent results. Nearly 40,000 of those new M1917 heavy machine guns were delivered by contractors to the US Army before the armistice, although, not all of these reached the troops in France before the end of the war
As the war ended, the US army settled on the Browning M1917 as the primary infantry machine gun. However, the cavalry requested a lighter weapon, still capable of sustained fire, and this was provided in the form of modified Browning machine gun, known as M1919. This weapon retained the basic action of the M1917 water-cooled gun, but had a shorter, air-cooled barrel, and used a light and compact tripod without traverse & elevation mechanisms. Shortly after its adoption, the M1919A1 tank gun appeared, to be used on the US Mark VII tanks instead of the obsolescent Marlin M1918 tank guns. The M1917 was upgraded to M1917A1 configuration in 1936 with the introduction of a strengthened bottom plate in the receiver and a few other minor changes. In 1940 the US army initiated trials for a new belt-fed light machine gun; several designs were tried, mostly based on previous Browning designs, such as the Springfield Armory gun, based on the A/N M2 aircraft MG with a limited rate of fire, or the Rock Island Armory gun based on the M1919. There were a few original weapons as well, such as Sedgley and Ruger gas-operated machine guns. None of the guns was found suitable, so the US Army adopted a slightly modified M1919A4 machine gun along with the M2 tripod as an interim measure. This version of the Browning design served as the primary medium machine gun for US troops through World War 2 and Korea. When US Armed forces began the transition from .30-06 to 7.62 NATO ammunition in 1957, some of M1917 and M1919A4 machine guns were converted to this ammunition, and few of those converted machine guns were used by US Navy during early stages of Vietnam war.

Copies of the Browning rifle-caliber machine guns were made under license in Belgium by FN and in Sweden by Carl Gustaf factory. Before WW2 Poland also manufactured an unlicensed version of the Browning water-cooled gun, the Wz.30.

All Browning recoil-operated infantry machine guns are built using same action, first introduced into service in 1917, and differ mostly in details of the barrel cooling and associated arrangements, as well as in mountings.
The M1917 and M1919 machine guns are automatic only, belt-fed machine guns, with water and air cooling respectively. Both weapons fire from a closed bolt at all times, and both use the same short-recoil action with a vertically-sliding locking block, which rises up to lock the bolt to the barrel extension and drops down on recoil to unlock the bolt from the barrel. An additional feature of the Browning design is that it has a bolt accelerator, made in the form of  a lever located at the bottom of the receiver. Once the barrel is unlocked from the bolt as the they recoil, the barrel on being stopped strikes the accelerator, so the kinetic energy of the recoiling barrel is quickly transmitted to speed the bolt's rearward movement, improving the reliability of the weapon. The barrel is screwed into the barrel extension and is not quick-detachable; furthermore, once the barrel is installed in the weapon, the headspace (the distance between the bolt face and the step in the chamber which supports the shoulder of the cartridge case) must be adjusted prior to firing, or the weapon may fail to fire or produce a serious jam. In M1917 machine guns, the barrels are enclosed within a water jacket, originally made from bronze and later from sheet steel. In M1919 weapons, the barrels are enclosed by tubular jackets with cooling slots. The back of the receiver houses a bolt buffer, which consists of several fibre disks which are used to soften the impact of the bolt on the receiver rear plate. The cocking handle is attached to the bolt and reciprocates with it in a slot made in the right receiver wall.
Browning rifle-calibre machine guns use a non-disintegrating ammunition belt of cloth or steel, with a left-side feed. Alternate-side feed versions of the M1919 were developed for tank use. The belt feed is of the two stage type – every cartridge is first withdrawn from the belt towards the rear by the pivoting extractor lever attached to the bolt. Once the cartridge is clear of the belt, it is lowered into a T-slot cut in the bolt face, and pushed forward into the chamber. Spent cartridge cases are forced down the T-slot and out of the weapon through the opening at the bottom of the receiver by the succeeding cartridges, or by the pivoting belt extractor lever for the last cartridge case. The belt feed is operated by the recoiling bolt via a swinging arm located in the hinged receiver cover. The swinging arm is oscillated by a cam track cut into the top surface of the bolt. As the bolt recoils, the arm shifts the feed slide to the left, so its feeding claw engages the next round. On the forward movement of the bolt, the feed slide moves to the right, shifting the belt by one round.
Since the gun fires from a closed bolt it has a separate firing pin, powered by its own spring, and housed inside the bolt along with the sear and cocking lever. Upon the recoil stroke of the bolt, the cocking lever pulls the firing pin back until it is engaged by the sear. Once the bolt is fully in battery, a pull on the trigger raises the trigger bar so that it acts on the sear and releases the firing pin. The standard firing controls consist of a single rifle-type trigger at the rear of the receiver and a pistol grip attached to the cylindrical buffer housing which projects from the rear end of the receiver. Alternatively, dual spade grips can be installed instead of the pistol grip, with a push-type thumb trigger located between the grips.
Standard sights consist of a folding blade front and a frame-type rear. The rear sight was invariably mounted on the receiver, while the front sight was located on the water jacket on M1917 machine guns and at the front of the receiver on M1919 machine guns.
The standard mounting for the M1917 machine gun was an M1917 tripod, a heavy all-steel construction with integral traverse and elevation (T&E) mechanisms. M1919A4 machine guns were usually issued with lighter and more compact M2 tripod, which also had a T&E mechanism. However, on M2 tripods the T&E mechanism could be discarded in emergency situations, if it was damaged or not required for the present mission.

The “light” M1919A6 machine gun was fitted with a detachable shoulder stock which was clamped onto a buffer tube, and a detachable bipod with adjustable legs which was clamped to the barrel jacket. Additionally, a carrying handle can be attached to the barrel jacket near the receiver. The M1919A6 barrels were of lighter profile, and thus badly suited for sustained fire.

The standard crew for an M1917 was four men; gunner, his assistant, and two more soldiers to carry ammunition and water. A typical crew for the M1919 machine gun is two men, a gunner and his assistant.