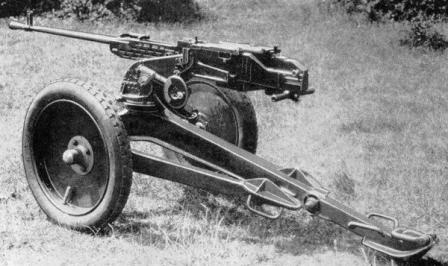 One of he most formidable machine guns of the interwar period was the monstrous ZB60 heavy machine gun, which was born out of a Czechoslovak army requirement for an automatic anti-armor weapon, issued in the late 1920s. The first test guns were more properly classified as automatic cannon, because of their 20mm caliber. Later work focused on guns of smaller calibers. In 1933 the Army changed the requirements for its future HMG, relegating it to the AA role and leaving anti-tank tasks for cannon and AT rifles. Despite much effort, it took several more years to perfect both the ZB60 weapon and its 15mm cartridge (developed by the Skoda factory). As a matter of fact, the Czechoslovak army received no weapons of the type, and ZB60 found much more favour abroad, being reportedly sold to Greece, Yugoslavia and Iran, and adopted by the British Royal Tank Corps as the 15mm BESA heavy machine gun, built under licence at the Birmingham Small Arms (BSA) factory and fitted to some British light armoured vehicles. The major user, however, was the German Army, which took over the output of occupied ZB factory during the war.

The ZB60 is a gas operated, air-cooled, belt fed weapon that fire from an open bolt. The barrel can be changed quickly to provide sustained firepower, and is fitted with a carrying handle.
The action of the gun is very similar to that of ZB53, scaled up for the larger cartridge, except that it has no dual-rate buffer system. Otherwise the gas action, tipping bolt locking and belt feed were more or less similar to same systems of the “smaller brother”. Feed was from the right side only, using steel belts.
A variety of mountings was designed for ZB60, those included ground-use and AA tripods, as well as wheeled mounts with a towing boom that can be unfolded to form a tripod.