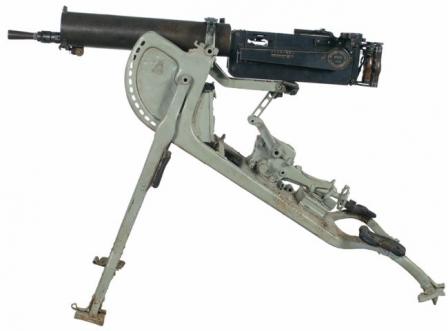 Maxim MG 08 medium machine gun on its peculiar “Schlittenlafette” (sledge mount); note that the mount is set to raised position.

Maxim MG 08 medium machine gun, less mount. The disk at the muzzle serves as frontal protection to the water jacket.

MG 08/15 “light” machine gun with 100-round belt container attached to the gun, right side.
Image:OlegVolk

The MG 08 was the German version of a new machine gun design created in the UK by Sir Hiram Maxim. Germany was one of the first buyers of Maxim’s machine gun. In 1892, the German company Ludwig Loewe obtained a 7-year manufacturing license from Maxim.

The manufacture of German guns commenced in 1894, and in the same year the German Navy adopted the Maxim MG in 7.92x57mm. The license expired in 1899, and at that time a newly established company, Deutshe Waffen und Munitionsfabrik (DWM) began production of the same gun for the German Army as the MG99. It was similar to all other Maxim type guns made in the same period, except for the mounting, which was somewhat unusual in appearance. Unlike most mountings, which had three legs, it was a four-legged ledge-type mounting, known as a Schlittenlafette. This weapon was slightly updated in 1901, when the bronze barrel jacket was replaced by a more economical steel one.

The definitive pattern of the German Maxim appeared in 1908, when the basic weapon was significantly lightened. It was known as the MG 08, or more properly, the ‘s.M.G. 08’ (schweres Maschinen Gewehr– heavy machine gun). It was produced by two factories– DWM and Koniglishe Gewehr- und Munitions fabrik in Spandau. The latter word was stamped in large letters on top of the receiver of Spandau-made guns, so eventually ‘Spandau’ became the nickname of German machine guns (although most related to LMG 08/15).

These guns were widely used during the Great War (World War 1), and took a heavy toll on Allied forces. After the war, MG 08 machine guns were used by the German Army until the appearance of more modern guns, such as the MG 34. German-made Maxim guns were also widely exported before WW1, and close copies of the MG 08 were built in China during the 1930’s, known as the ‘Type 24’ Machine Gun.

The MG 08 Maxim machine gun is short recoil operated, water cooled, full automatic only, belt-fed machine gun. All Maxim guns fired from a closed bolt, which was not a problem for water-cooled guns. The water jackets themselves were made from sheet steel.

The basic toggle-lock action, patented by Hiram Maxim, used two struts, connected by the hinge. These were located between the breech block and barrel extension in such a manner that when the breech block was in battery, struts formed a straight line and transferred the pressure, exerted by the hot powder gases through the base of the cartridge, directly to the barrel extension.

This caused the entire barrel / extension / breech block group to recoil inside the receiver, against the tension of the spring, located under the separate cover outside of the left receiver wall. After short recoil, the cocking handle, which was located on the rear axis of the toggle system, struck the pin installed on the right receiver wall.This caused the cocking handle to rotate up and forward, thus breaking the toggle down.

The cocking handle served as both unlocking member and a breech block accelerator, as its shape caused the toggle to open rather fast. During the opening movement of the breech block, the empty cartridge was extracted from the barrel, and the separate breech face,with integral T-slot that held the cartridge case by its rim, was slid downward, to put the fired cartridge case below the barrel and in alignment with a short extraction tube, that was located under the barrel and emerged from the front of receiver. At the same time, the fresh cartridge that was picked by the T-slot during the previous cycle, was lowered and put in line with the chamber. The closing movement of the toggle was controlled by the return spring, located on the left side of the receiver. Unlike most other weapons, the return spring was extended during the recoil, rather than compressed; it was attached to the pivoting lever, located co-axially with cocking handle on the rear toggle axis.

Thus, upon counter-recoil cycle, this spring forced the toggle to straighten up from its bent position, pushing the breech block (with fresh cartridge above and fired case below both held in in the T-slot) forward, and entire barrel / breech block system into the battery. Upon final part of closing movement of the bolt, the sliding breech face was risen up, to leave spent cartridge in the ejection tube and to catch the next fresh cartridge from the belt by its rim. If the trigger was still pushed, the firing pin was released by the trigger ling, which engaged the sear, built into the breech block. The trigger itself was located between dual spade grips, at the backplate of receiver; it was pushed by thumbs.
The feed system used non-disintegrating belts, made from cloth or tarpaulin, with metallic struts. Feed was from the right side only; feed system was operated through the horizontally pivoting pin / levers system by recoiling barrel group.

The muzzle booster was of an indigenous design, with a conical flash-hider.Additionally, the muzzle of MG 08 machine guns was often fitted with small circular shield, which protected the front of the thin-walled water jacket (made from sheet steel) from shrapnel, low-velocity bullets and other fragments. The return spring was easily adjustable for tension, with a special scale provided on the spring cover. The receiver backplate was hinged to the receiver.
The MG 08 was usuallyissued on a sled-type mount of adjustable height (SchlittenLafette08). This mount allowed the gun to be dragged through the battlefield,or to be carried like a stretcher by two or more soldiers. The mount was provided with traverse and elevation mechanisms with rough and fine adjustments. Alternatively, the MG 08 could be installed on a tripod mount commercially developed by DWM.

lMG 08/15 (also often referred as MG 08/15): a light (leichtein German, hence small letter “l” in designation; a capital letter “L”was used in designating the aircraft (Luft – air) version of the MG 08)machine gun version of MG 08, developed at the government arsenal in Spandau and manufactured from 1916. The water jacket is of smaller diameter and holds less water (3 as opposed to 4 litres in the MG 08 jacket). The receiver backplate with spade grips and trigger is replaced with an alternative backplate with a wooden shoulder stock,and a pistol grip with trigger was installed at the bottom of the receiver. The receiver was significantly lightened by use of thinner walls and by “cutting off” unnecessary parts of the receiver behind the feed at the top, and in front of the trigger at the bottom. A bipod was provided below the water jacket, and a special hanger installed on the receiver. This hanger was used to mount a 100-round belt container(Gurttrommel); alternatively, the lMG 08/15 can be fed from separate250-round belt boxes, developed for the MG 08.
lMG 08/18 (also often referred as MG 08/18):an air-cooled version of lMG 08/15. The water jacket is replaced by as lotted tubular jacket of smaller diameter, fitted with a carrying handle. Very few were produced before the WW1 ended.