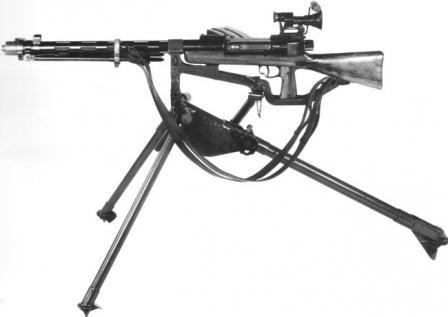 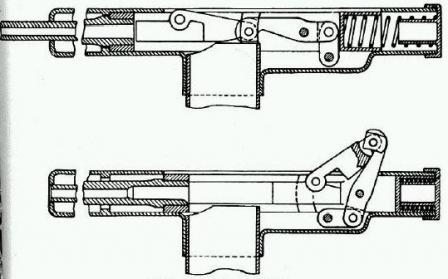 Leichtes Maschinengewehr Modell 1925, or Lmg 25 in short, was developed during early 1920s by Colonel Adolf Furrer, superintindent of the Waffenfabrik Bern (W+F) arms factory. It was adopted by Swiss Army in 1925, manufactured at W+F until about 1946, and served with the Swiss army until the late 1950s, when it was declared obsolete following the introduction of the Stgw.57 assault rifle (chambered for the same 7.5×55 GP11 rifle ammunition), which was rather close to Lmg 25 in its capabilities, except for the lack of the quick barrel change facility.

The Lmg 25 is an air cooled, selective fired, magazine-fed light machine gun that fires from an open bolt (the barrel also is held back when gun is cocked, and it is released only when the trigger is pressed). The action of the weapon is recoil-operated (short-recoil principle, with additional muzzle recoil booster). Barrel locking is achieved by using a modified Maxim-type toggle-lock. Unlocking (breaking of the toggle) is controlled by an additional third link, which connects the rear end of the toggle with the frame. Upon recoil, the toggle opens to the left, therefore receiver has a large window in its left wall, which is also used as the ejection window. During transportation and storage, this window is covered by a special dust cover, which is opened before cocking the gun. The specific aspect of the Furrer system, as compared to other short-recoil operated guns (toggle-locked and others), is that the bolt and barrel are mechanically linked for the entire cycle of the action, not just through its “locked” part. This means that the entire movement of the bolt is controlled by the recoiling movement of the barrel, although the bolt recoil velocity is necessarily much higher than recoil velocity of the barrel. This linkage results in constant and accurate timing between all moving parts; another benefit is the greater reliability of the system, as the entire mass of the recoiling barrel is used to move the bolt through the whole operating cycle. Yet another benefit of this system is a relatively slow cyclic rate of fire. The drawback is the very close tolerances necessary in the linkage system to achieve proper timing, which increases the cost of the weapon.
A rapid barrel change is possible, although this also involves the change of the barrel extension (to which the barrel is securely screwed) and bolt (which is serially numbered to the barrel). The trigger mechanism is striker-fired and permits single shots and automatic fire. The striker release system is so designed that it fires the cartridge just a moment before the entire recoiling group (barrel, its extension and bolt with locking toggle) hits the front stop in the receiver. In automatic fire this gives the benefit of a significantly smoother recoil, as this first have to overcome the inertia of the moving parts. The location of the safety / fire mode selector lever is quite unusual, as it is placed on the top front part of the magazine housing. The charging handle is located immediately behind the magazine housing, on the right side of receiver. The feed system uses double-stack curved box magazines, inserted horizontally from the right. Empty cartridge cases are ejected to the left. The machine gun is fitted with a wooden stock with a pistol grip and short forend, which permits firing from the shoulder. An adjustable folding bipod was attached to the front of the barrel jacket, close to the muzzle. Despite the fact that the Lmg 25 was regarded as a light machine gun, it could be used from a variety of mountings, including a special light tripod with traverse and elevation mechanisms, as well as fortress mountings. Sighting equipment consists of rifle-type open sights; if necessary, a telescopic sight can be installed on top of the receiver.