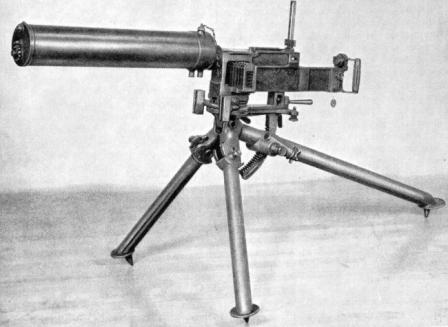 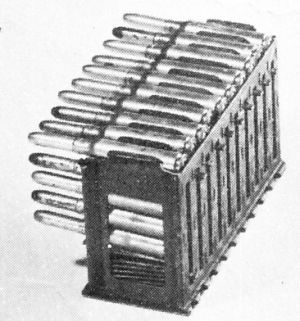 After much experimenting and tests with domestic and imported machine guns, after the start of the Great War the Italian army adopted domestic machine gun, the Fiat-Revelli M1914. It was officially known as the Mitragliatrice M1914– (machine gun, model of 1914). Its basic design was the brain-child of Bethel Abiel Revelli, a Captain in the Italian army, who had already designed a semi-automatic pistol adopted by Italian military.
In his machine gun Revelli employed the same retarded blowback system with a movable barrel that he also used for his pistols (Glisenti M1910 and Brixia M1912). Revelli patented his first machine gun ideas in 1908, and in 1913 a medium machine gun of his design was more or less successfully tested by the Italian army. This weapon had some other peculiar features, such as the unusual feed system, which is quite hard to classify. It could be described as multi-compartment box magazine, which was moved sideways (harmonica-style) once the previous compartment had been emptied. The downsides to this set-up were the heavy weight of the magazine and its tendency to collect dust, dirt, snow and other battlefield debris because of its open design. Obviously, all this debris was then moved along with the cartridges into the gun. Another feature, a top-mounted crescent-shaped charging handle which oscillated during firing above the top of receiver, gave this gun the nick-name of “knuckleduster”.
During the early 1930s Italian army decided that the 6.5mm ammunition lacked the range and striking power desirable in a medium machine gun. A series of trials was organized to select an improved round of ammunition, which cumulated in the adoption of the 8×59 M35 cartridge, also known as the 8mm Breda. This was a powerful round, which outclassed the 6.5×52 M91 by a wide margin. The first gun to be chambered for this round was the heavily modified FIAT-Revelli, which in the course of development lost its harmonica-type magazine system, integral oiler (later re-installed due to poor functioning of the gun without oiler) and water-cooling jacket. Its new feed system comprised a removable belt-feed unit (using non-desintegrating steel belts), and new air-cooled barrels with fluted chambers were made quick-detachable. Most of the 8mm FIAT guns, designated as M1914/35, were converted from older M1914 guns, but at least some were also newly manufactured in 8mm caliber. While it served through World War 2, it was hardly an improvement over the M1914 and disappeared immediately afterwards.

The FIAT-Revelli M1914 machine gun is a water-cooled, retarded-blowback operated weapon that fires from a closed bolt. Its action employs a recoiling barrel (with a relatively short recoil stroke), and a rectangular, longitudinally-sliding bolt mounted inside the barrel extension. The bolt and barrel are connected by a pivoting wedge, located in the receiver. The wedge is allowed to rotate back and forth around the axis located below the moving parts. When the parts are in battery, the top part of the wedge passes through a small opening in the bottom of the barrel extension and enters a recess cut on the underside of the bolt. Upon discharge, the gas pressure forces the bolt rearwards and its movement rotates the wedge back. This rotation also carries the barrel extension and barrel along in the recoil movement, although because of slightly different leverage barrel recoil velocity is lower that than of the bolt. This initially adds the mass of the barrel group to the mass of the otherwise unlocked bolt while pressure in the barrel is still high. Once the wedge has rotated back enough to release the bolt, the barrel is stopped and the bolt is free to continue rearwards under the residual gas pressure and accumulated inertia. The axis of the wedge is eccentric, so the exact position of the wedge in relation to the barrel extension and bolt can be adjusted for proper functioning. This can be done after opening the right side plate of the receiver.
The rear part of the bolt in full recoil projects from the receiver above the top cover, and is fitted with a T-shaped cocking handle. At the end of the recoil cycle, the cocking handle strikes the recoil pad / buffer located above the receiver cover and between the spade grips.
This machine gun fires from a closed bolt and is therefore fitted with a separate striker firing mechanism. The rear part of the striker projects behind the cocking handle, so the operator can visually check if the gun is cocked, or even re-cock the gun manually. The firing controls include a thumb-trigger located between the spade grips at the rear of receiver, and a manual safety/selector lever above the trigger. The gun fires in automatic or single shot modes, with the sear being tripped in automatic mode by the retarding wedge once it rotates to its forward most position during counter-recoil cycle. The mode of fire is selected by the position of the safety switch.
The feed system is most unusual, as it uses a horizontally-sliding block of integrally connected single-stack box magazines, located side-to-side. The feeding unit consists of 10 compartments, each of these holding five rounds under the pressure of individual springs. A fresh “magazine” is inserted into the large receiver aperture from the left, until the first compartment is in line with the barrel. Fresh cartridges are stripped by the bolt from the top of the compartment until last one is fed. When this happens, a protruding lip, formed at the rear of the compartment’s cartridge follower, trips the internal lever which releases a spring-loaded indexing mechanism that moves the feed unit across one step to the right, until the next full compartment is positioned in line with the barrel. The spring of the indexing mechanism is then re-cocked automatically by the movement of the barrel extension. Once all compartments in the feed unit are expelled, the unit is ejected from the gun automatically. Empty cases are ejected upwards through an aperture in the top of receiver. This aperture is fitted with a manually-opening dust cover. It is interesting to note that while this magazine unit seems to provide quick reloading from standard rifle stripper clips, in fact this was not possible. The Italians at the time used Mannlicher-type en-block clips in their Carcano rifles, and, furthermore, those clips held six cartridges rather than the five needed to fill one compartment in Revelli magazine.
The standard mounting for Revelli machine gun was a solid tripod with tubular legs, fitted with traverse and elevation mechanism.