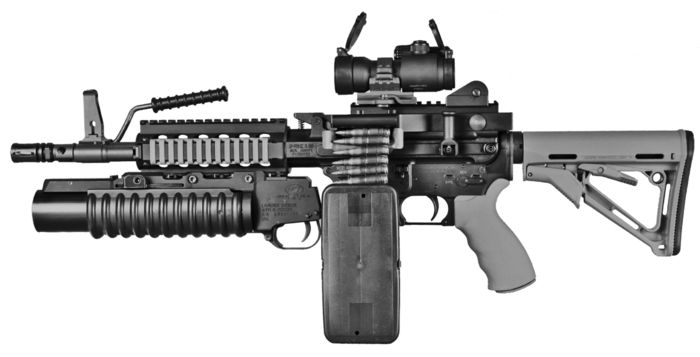 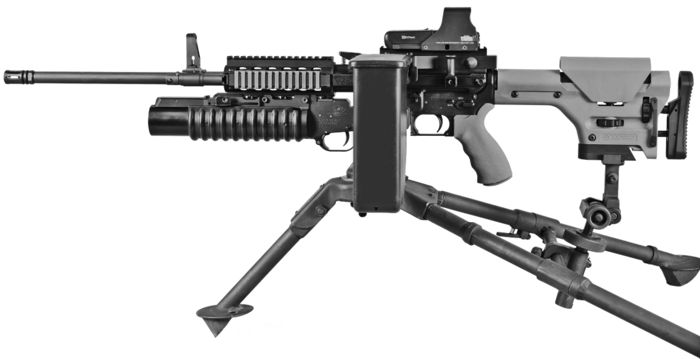 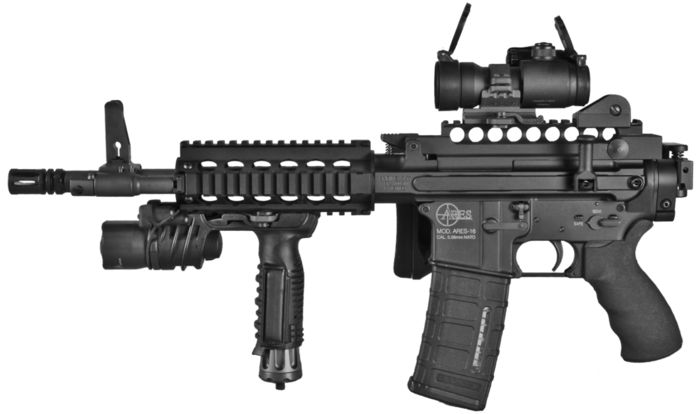 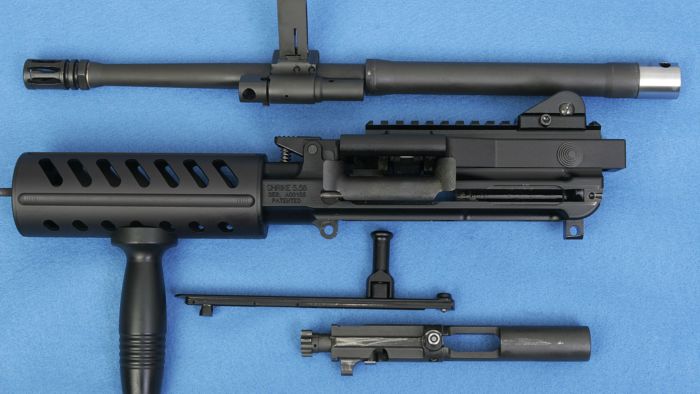 The Ares “Shrike” advanced weapon system came from an attempt to create a dedicated belt-fed upper receiver module for the versatile and highly popular M16 / Ar-15 line of rifles. It is manufactured in USA by Ares Defense Systems, Inc.

Attempts to create a belt-fed light machine gun based on the Ar-15 / M16 rifles were made several times since 1960s but each time proved to be unsuccessful. In most cases, the reason for this was that designers used standard upper receiver with standard gas-operated action. This had several serious downsides, including need to cut additional windows in the receiver walls for belt to pass, plus insufficient power, generated by the standard gas-operated action, as belt feed system requires noticeably more power to pull the heavy belt. The Ares “Shrike” designer, Geoffrey Herring, decided to avoid these problems by creating a completely new, dedicated belt-fed upper receiver that will fit onto any standard Ar-15 (semi-automatic) or M16 (select-fire) lower receiver assembly, converting rifle into the lightweight machine-gun / squad automatic weapon. Herring started his work in around 1998, and working prototypes of the “Shrike” upper receivers were demonstrated as early as in 2002, but it took several more years and a lot of hard work to finalize the design. In the course of development the “Shrike” evolved from simple belt-fed conversion into ins current state of the art light machine gun / advanced weapon system, with several basic versions, all based on the same gas-operated action / upper receiver group, mounted onto standard Ar-15 / M16 lower receiver (for magazine- or dual-feed options) or a dedicated Shrike lower receiver (for belt-fed versions only). As of early 2011, the Ares “Shrike” advanced weapon system is in full production, shipping to civilian customers (for semi-automatic conversions) and law enforcement organizations (which are authorized to use full-automatic weapons). When compared to other, existing light machine guns / squad automatic weapons of the same caliber, the Ares “Shrike” appears to be noticeably lighter – its empty weight with standard barrel is about the half of the empty weight of the FN Minini / M249 Para (with short barrel) or HK MG4.

The heart of the Ares “Shrike” weapon system / light machine-gun is the modular upper receiver with quick-change barrel system and gas operated short-stroke piston action. Gas blocks and pistons are located on the left side of each barrel, operating the proprietary bolt group with 6-lug rotating bolt. Receiver is open from the top, and can accept either a belt feed module (operated by the stud at the top of the bolt carrier) or a simple cover (for magazine-fed Shrike AAR versions). The bolt group is designed to provide reliable feeding either from NATO-standard disintegrating belts (inserted into the belt feed unit above the bolt) or from standard M16-type magazines, inserted from below, into the magazine housing of the Ar-15 / M16 type lower receiver. Conversion between dual-feed (belt / magazine) and magazine-fed only versions can be done in less than one minute, simply by swapping upper receiver top covers. If user does not need magazine feed option, he can obtain a dedicated Ares “Shrike” lower receiver (available in semi-automatic ARES-15 and select-fire ARES-16 versions for civilian and military / LE markets, respectively). These lower receivers do not have magazine well; instead, a clamping mount for a belt container is provided in front of the trigger guard, resulting in a lower profile of the loaded weapon.

In its standard configuration, the Ares “Shrike” fires from closed bolt, utilizing standard Ar-15 / M16 trigger and manual safety arrangements. If required, standard “M16 open bolt conversion” can be applied to the gun to convert it to open bolt firing.

Standard furniture for Ares “Shrike” weapons includes forend with accessory rails, adjustable M4-type shoulder stock, and a GripPod unit, which combines vertical foregrip for assault firing and a small, easily deployable bipod for additional stability when gun is fired from support or prone position. Top cover of the upper receiver is also fitted with Picatinny rail, which normally hosts back-up iron sights plus any type of optical / red dot / IR sights, according to the user preferences. The Ares “Shrike” can accept other add-ons, such as M203 grenade launcher (via rail interface). It also can be installed on a standard machine-gun tripod, using special adapter with T&E mechanism.