Note: hover the mouse pointer over images to get the description

Way back, in 1862, someone dr. Gatling of USA patented a manually operated, multi-barreled mechanical "machine gun", one of the most successful of such designs. Being gradually updated, this weapon, in many versions, served with number of armies around the world as an infantry support or a light artillery weapon. Usually chambered for the contemporary general issue rifle cartridge, the XIX century Gatling guns usually have 6 to 10 barrels, mounted around the single axis. Some naval Gatlings, thought, have had calibers up to 1 inch (25mm), and some derivatives, like the Hotchkiss, were up to 53mm in caliber. When crank at the back of the gun was rotated, the "bundle" of barrels rotated too. Each barrel had its own bolt, which completed full reloading circle per one turn of the barrels bundle. This resulted in the rate of fire as high as 200+ rounds per minute – quite an achievement in the era of the single-shot and even magazine fed rifles. While first successful "true" machine guns appeared by 1890, some Gatling guns seen use until World War 1, especially with the navies.

As the automatically operated machine guns became more and more mature, Gatling guns were gradually forgotten, until the late 1940s. At that time, the speed of combat aircrafts became so high, so even most fast-firing conventional machine guns became too slow to achieve desirable number of hits during the very brief encounters. This spawned the famous "Project Vulcan", that was intended to develop a super-rapid firing weapon for US Air Forces. Project was handled by the General Electric Co. First tests were conducted with the late 19th century Gatlings, fitted with electrical drive instead of manually operated crank; this immediately resulted in the rate of fire of about 4 000 rounds per minute, which was very impressive (it must be noted, that such tests were first conducted in early 1890s, but lead to no practical results at that time – there were no need in the rate of fire of up to 3 000 RpM). Further development resulted in some experimental, electrically driven, .60 caliber machine guns with 6 barrels, and, in 1956, the 6-barreled 20mm T171 gun was officially adopted as the M61 aircraft gun. This gun could fire at the rate of 4 to 6 thousands rounds per minute. This achievement is possible due to the fact that gun has multiple barrels, and the rate of fire per one barrel is about 1 000 rounds per minute or even less, allowing them to not to overheat. M61 became the main aircraft gun for US AF, and also was used on M161 and M163 Vulcan ground anti-aircraft gun mounts. The navies also turned back to Gatlings with the Vulcan-Phalanx CIWS (Close-In Weapon System). 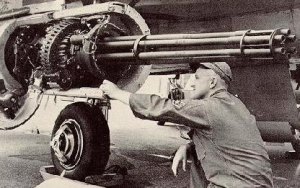 When USA entered the Indo-China troubles during early 1960s, they soon found that they need to arm their helicopters, to provide additional firepower against enemy infantry. These applications also required a lot of firepower delivered in the short periods of time, so General Electric designers simply scaled the M61 gun down, for 7.62x51mm NATO ammunition. The resulting weapon, known as the M134 Minigun, could fire up to 4 000 rounds per minute, and soon found its way to the various helicopter mounts. It was mounted on chin turrets and in wing pods on AH-1G "Cobra" attack helicopters, on door, pylon and pod mounts on UH-1 "Huey" transport helicopters, and on many other helicopters and aircrafts, including famous "Gunship" airplanes like A/C-47 and A/C-119. 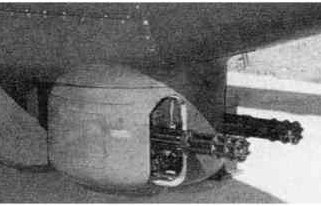 Usually, AH-1G "Cobra" carried one or two Miniguns in its chin turret, with the 2 or 4 thousands rounds of ammunition. The UH-1 could carry one or two (or even more) Miniguns on various mountings, with as much as 12 000 rounds of ammo available for "immediate delivery to enemy". 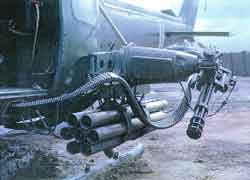 With the introduction of the 5.56mm ammo into the military service, Americans attempted to scale the the Minigun further down, resulting in the weapon, known as XM-214 Microgun. This little beast had 6 5.56mm barrels, was electrically driven and could fire up to 10 000 rounds. But the 5.56mm was way too weak for air-to-ground or ground-to-air (anti-aircraft) applications – the key niches of the modern Gatling systems. For the infantry, the Microgun had almost no use, being to heavy, complicated and with too much rate of fire and recoil (recoil force was up to 110 kg / 240 lbs at the full rate of fire). Infantry simply does not needed an extremely rate of fire to deal with the enemy infantry, and for AA use (where such high RoF makes sense), the 5.56mm (.223mm) and 7.62mm (.308) ammo is way too weak. 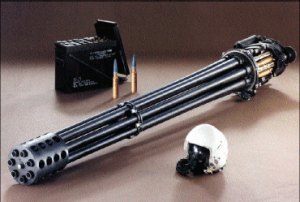 Others than noted, US also developed a number of other Gatling-type designs chambered in .50BMG, 20mm, 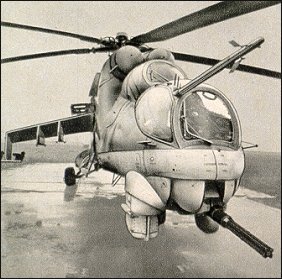 25mm, and even 30mm (like the famous GAU-8/A "monster gun", shown at left,  mounted on the A10 Warthog attack planes). It also must be noted that the USA was not the only country to exploit Gatling ideas. USSR (and latter Russia) built several aircraft and AA guns and machine guns. For helicopter use, they made a 4-barreled machine guns in 7.62mm and 12.7mm, and for aircrafts – 23mm and 30mm 6-barreled guns. Some 6-barreled 30mm Gatling type guns also used by Soviet and Russian navy for shipborne AA installations, sometimes coupled with short-range AA missiles.

Key advantage of the modern, externally powered Gatling type guns, is the extremely high rate of fire, usually 4 to 6 thousands of rounds per minute (RPM), sometimes up to 10-12 thousands RPM. This rate of fire is necessary to deal with the fast-moving targets, when the engagement time is very short. Such targets are mostly aircrafts, or ground targets, fired at from aircrafts. The downside of multi-barreled systems is they relative complexity, heavy weight, and requirements for external power (electrical, pressured air or hydraulics). There are few self-powered (gas-operated) Gatling type guns, but they still are much bulkier and heavier, than the conventional single-barreled guns. Another drawback of the Gatling-type guns, which is essential for aerial combat, is that the gun requires some time to get on to the full speed (rate of fire) after the trigger is pressed. For the M61 Vulcan cannon, for example, the "speed up" time is about 0.4 second or so. 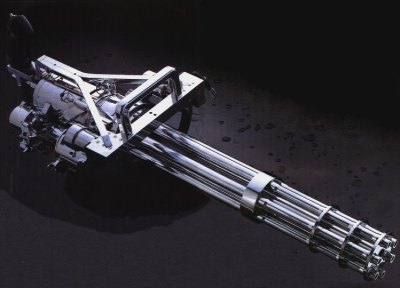 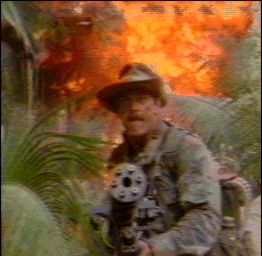 In the year 1987 the movie "Predator" (starring A. Schwarznegger) hit the screens. One of the most impressive scenes was the one where the US Commandos, led by "Dutch" (Schwarznegger), attempted to fight back the alien Predator. One of Commandos was armed with the distinctive weapon, a 6-barreled rotary Minigun, fed from backpack ammo box. This gave the impression that the Miniguns can be used for infantry support. It must be noted, that in this movie a special, blank firing version of the Minigun was sued. The electric motor was powered via cable, hidden in the actor's pants, and the actor had to carry bulletproof vest and protective mask to avoid injuries from the fast and violently ejecting empty cases. Had this gun being fired using real ammunition, the actor would ended lying on his back, being forced off the legs by the violent recoil. The "backpack" ammo capacity, also, could be worth only several seconds of fire. lets calculate: 2 000 rounds of 5.56mm ammo will weight about 25 kg (55 lbs); 2 000 rounds of 7.62mm will weight about 2 times more, making such load almost impossible to carry on foots. yet this load of ammo will worth only 20 or so seconds of fire. Add some powerful batteries to power electrical drive of about 4KWt (4+ horse-power), and the bulk of the gun itself, and you'll see that even the strongest man won't be able to carry this load, less to fire it with any chance to hit, due to extremely powerful recoil.