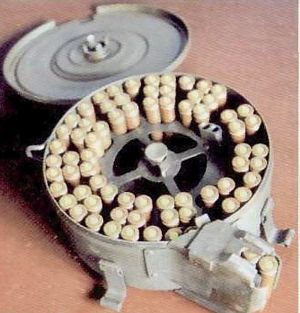 Type 95 light machine gun (Chinese designation QBB-97) is a companion weapon for relatively new QBZ-95 assault rifle, which isnow in service with People's Liberation Army of China. QBB-97 shares about 70%of components with the assault rifle, and differs mostly in that it has a longerand heavier barrel, fitted with folding bipod. It is intended to serve as a squad automatic weapon, providing effective automatic fire at ranges up to 600meters. An export version of the QBB-95 is offered through NORINCO corporationas Type 97 LMG. It is basically same weapon but adapted to fire 5.56x45mm NATOcartridge from M16-compatible magazines.

Type 95 is gas operated, selective fired, air cooled light machine gun. It uses a short stroke gas piston, located above the barrel. Rotary bolt has three lugs that lock into the barrel extension. Receiver is made from polymer and is of bull-pup layout. Charging handle is located at the top of the receiver, under the carrying handle. Safety / fire mode selector switch is located at the left side of the buttstock, close to the rear end of the weapon. Ejection is to the right side only. Standard magazine is a proprietary 80-round drum with asymmetrically located mouth. QBB-95 also can accept standard 30 round box magazines from QBZ-95 assault rifle.