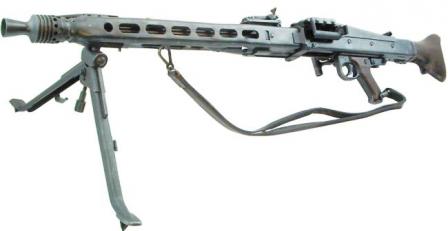 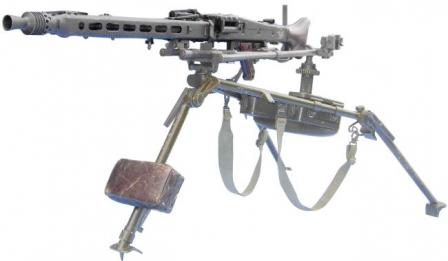 MG3 machine gun in ‘light machine gun’ role, as made under license in Pakistan. 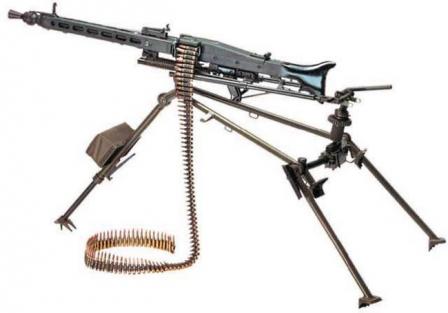 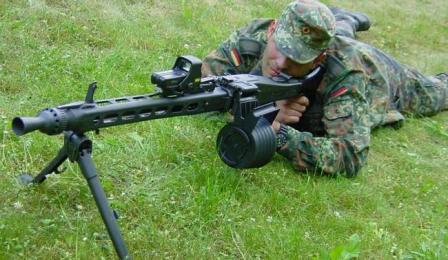 A German soldier aiming the MG3, fitted with EOTech holosight red-dot optics and a 50-round plastic belt container (which appears to be empty). 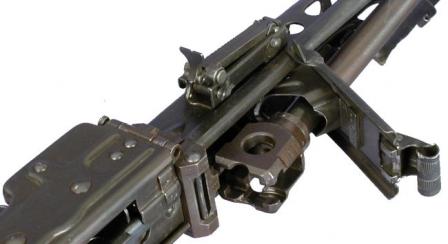 Barrel change for MG 42 – the barrel is unlatched and its breech part is exposed for removal. 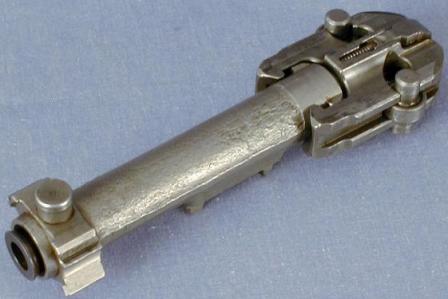 MG-42 bolt assembly. Locking rollers and extractor claw are seen at the right and belt-feed operating studĀ on the left. 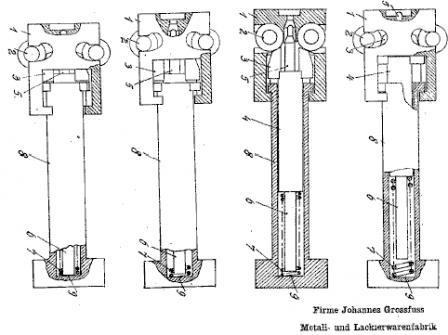 The MG 42 machine gun was the result of German efforts to simplify the manufacture and reduce the cost ofĀ the the world’s first ‘Universal’ machine gun (general purpose machine gun), theĀ Ā MG 34.

The Wehrmacht first adopted the MG 34 in 1934, and first issued it to troops in 1936. With it, theyĀ had the weaponĀ they hadĀ envisaged some 20 years before. While the MG 34 was a very good weapon, it was certainly not ideal. German experts wanted their machine guns to fire faster and beĀ less costly andĀ complex to construct. A high rate of fire was desirable both for AA applications and for surprise flanking fire to overwhelm targets quickly as they move through the battlefield.

The MG 42 was designed by the engineer Gruner (often wrongfully referred to as Grunow) and small arms designer Horn. In accordance with theĀ HWaA request the new weaponĀ had stamped steel construction, combined with aĀ locked breech andĀ short recoil action. Initial trials suggested that the Grossfuss MG needed further development, and in late 1941 a small batch (of about 1500 pieces) of improved guns was manufactured for troop trials as the MG 39/41.

The new machine gun, while designedĀ to lower standards of fit and finish than the MG34, proved to be quite functional and reliable. These are features that the much more ārefinedā MG 34 lacked, especially in the mud and snow of the Russian front. Subsequently, it was adopted officially as the MG 42, and production commenced later that same year, 1942.

In general terms, the MG 42 was a great success. It fulfilled the roles of a light machine gun on a bipod, a medium machine gun (onĀ the newly developed Lafette 42 tripod), and an anti-aircraft machine gun, mounted in single and twin installations, both ground and vehicle-mounted.

It was relatively inexpensive to make and required less raw materials than the MG 34,Ā while beingĀ simple to maintain and use. On the minus side, it had a somewhat excessive rate of fire (!), usually quoted as 1200 rounds per minute, although German WW2 era manuals listed it as 1500 rounds per minute (25 rounds per second). This rate of fire resulted in an excessive consumption of ammunition and rapid overheating.

While the extremely rapid barrel change procedure allowed for sustained fire, the resulting accuracy left something to be desired. Excessive vibration from recoil, combined with a short sight radius, resulted in degraded long range accuracy compared with the earlier MG 34 and more especially, the heavy WW1 eraĀ MG 08 Maxim guns.

Nonetheless the MG 42 was an impressive and fearsome weapon, known toĀ Allied soldiers as āHitlerās buzzsawā, for the soundĀ it made whenĀ firing –Ā which resembled the sound of a giant mechanical saw, or sheets ripping.

After WW2 this weapon, unlike other wartime designs, lived on. In 1958, the FRG (WestGermany) re-instituted its official armed force,Ā newly namedĀ the Bundeswehr. Since the core of the Bundeswehr was formed of WW2 veterans, it was logical to adopt weapons which were already proven and familiar to the troops. The MG 42 was an obvious choice.

It was chambered for a ānon-NATOā cartridge, but this was only a minor issue, as the 7.62×51 NATO and 7.92x57mm Mauser shared the same cartridge base diameter, and were somewhat similar in ballistics. The real problem, however, was that Germany had lost most of its manufacturing facilities for the MG 42. The newly re-established Rheinmetall concern had to install production facilities from the ground up. The production plansĀ for theĀ original MG 42 machine gun were obtained from the Grossfuss company and transferred to Rheinmetall (for which the German government had to pay significant royalties to Johannes Grossfuss).

First Appearance of the MG 3..

Since the preparation for manufacture took some time, the FRG purchased some ex-Wehrmacht MG 42 weapons from other countries. Those guns were converted to 7.62 NATO by Rheinmetall and officially designated MG 2. Meanwhile the newly produced MG 1 guns went through a number of modifications, which resulted in the definitive MG 3 version.Ā MG 3Ā is still rather close in design termsĀ to the wartime MG 42, although made to much higher standards of fit and finish.

The simplicity, low manufacturing cost and high effectiveness of the MG 3 attracted several other countries, which either bought the guns from Rheinmetall (such as Denmark), or obtained manufacturing licenses and built (or at leastĀ did in the past) the same guns domestically (such as Italy, Iran, Turkey, Pakistan and former Yugoslavia). In total, at least twenty armies worldwide have used or are stillĀ using the MG 3 and its variants. It must be noted that in some countries these guns were used under their “commercial” Rheinmetall designation MG 42/59.

The MG 42 / MG 3 is a short-recoil operated, air cooled, belt fed weapon which fires from an open bolt. The barrel is quick-changeable, and can be replaced in less than six seconds by a properly trained crew, although a heatproofĀ glove is required to remove the hot barrel.

The action of the weapon is operated by the recoil of the locked barrel, assisted by a muzzle booster which uses pressure from the muzzle blast to increase the recoil impulse. Locking is achieved by a pair of rollers, which are forced outwards from the sides of the bolt head to engage cuts in the barrel extension. Locking (outward) movement of the rollers is controlled by the wedge-shaped front part of the bolt body; unlocking (inward) movement of the rollers, by the cams made in the receiver. This is a simple and solid system which minimises the length of parts that are under stress upon discharge, and also minimizes the strain on the receiver.

The receiver and barrel jacket are made in one unit, and formed from a sheet of rolled steel, cut to shape by pressing and stamping.Ā It isĀ then welded and pinned to form a gun housing of generally rectangular cross-section. The front part of the housing serves as a barrel jacket and has a number of oval cooling slotsĀ on all sides except the right. The right side of the jacket has one long slot which is used to remove the barrel.

The barrel is held in place by a hinged lock, located at the rear of the opening in the right side of the jacket. To remove the barrel, the operator must first lock the bolt in the open position (cock the weapon), and then turn the barrel lock to the right and forward. This will release the barrel and bring its breech area out of the jacket, so thatĀ it can be grabbed (historically using the issued asbestos glove or other heat insulation means if the barrel is hot) and pulled back and out of the jacket. The new barrel is then inserted all the way forward and the lockĀ Ā then snapped into place, bringing the barrel into alignment with the action. See an example videoĀ here.

The gun is fed using belts only. Feed direction is from left to right; the feed is of the one-stage, push-through type. The belt is the same as for the MG 34, with steel links with open pockets, assembled into non-disintegrating 50-round lengths. The same MG 34 type āGurttrommelā 50-round drum-type belt containers can be used with the MG 42, and a new type of lightweight plastic 50-round belt container was developed in West Germany by HK and is now issued with MG 3 guns.

The belt feed is operated by the reciprocating bolt which has a roller at the top of its body. This roller engages the cam track in the oscillating lever, located in the top-opening feed cover. The lever operates the belt pawls in two steps, on both theĀ opening and closing movement of the bolt, resulting in a smooth and positive feed. This two-step belt traction is particularly useful because the high rate of fire results in high-speed belt movement, and this system reduces the strain put on both the feed unit and belt links. Current production MG 3 guns can fire ammunition from either non-disintegrating or disintegrating belts.

The trigger unit is of relatively simple design, and permits for automatic fire only. The manual safety is of the cross-bolt, push button type, located at the top of the pistol grip. The charging handle is located at the right side of the receiver, and separated from the bolt group (it does not move when gun is fired).

In the medium MG role, the MG 42 was used from the Lafette 42, a complicated foldable tripod with aĀ buffered cradle. A wideĀ range of tripodsĀ are available for MG 3 guns, produced in several countries. The standard sights are open, fully adjustable, and mounted on folding bases. The universal tripod has provision for mounting telescopic sights for long range and indirect fire missions.

The MG42 has both an illustrious and devastating history, depending largely on which side of the trigger you were on. It is an effective, now legendary weapon system that has proven itself to be a timeless design, still in wide use today.