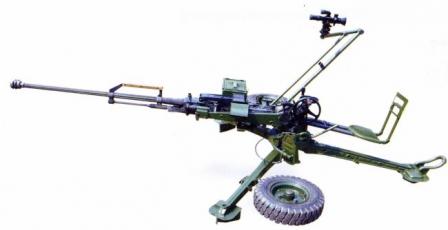 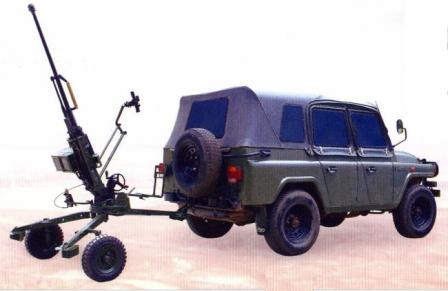 Up until recently the most powerful machine gun in the PLA inventory was the 14.5mm Type 58 – a straightforward copy of the Soviet Vladimirov KPV, used on single,twin and quad AA mounts. Only recently has the PLA bothered with are placement for this old, but still effective weapon, and in 2002 it adopted the new QJG 02 14.5mm HMG. This weapon is of indigenous design,and it looks somewhat like an enlarged W-85.So far it has been observed only on low-profile, single-gun AA mountings, which also can be used for ground applications. It is believed that QJG 02 heavy machine gun is already in service with some units of PLA. An updated export version of the gun, named QJG 02G, is being promoted by its maker, the Chinese arms factory No.36. The key difference between QJG 02 and QJG 02G is that the latter has the mount with detachable towing wheels.
The QJG 02 can fire all types of 14.5mm ammunition, including the newest Chinese DGJ 02 SLAP ammunition with muzzle velocity of 1250 m/s (4100 fps) and claimed armor penetration of 20mm at 50o angle at 1000 meters.

Reliable information on this new machine gun is very limited so far. It is believed that limited production of the Type 02 HMG started in around 2004 or 2005.
The Type 02 is a gas operated, air cooled, belt fed, machine gun that fires from an open bolt. Barrel is quick-detachable and has a carrying handle attached to it. QJG 02 uses a rotary bolt locking system.
The Type 02 is associated with a special low profile mount, which consists of an adjustable tripod with a turntable that hosts the gunner’s seat, traverse and elevation mechanisms, and the gun cradle with built-in recoil dampers. When traversing, the entire turntable with gunner and gun is rotated; the rotation is controlled by a horizontal wheel located in front of the gunner.Elevation of the gun is controlled by another wheel, located to the left of the traverse control. The gun trigger is operated by the pedal.The entire system is said to be easily disassembled into five man-packs, each weighing 20 kg or less.
The Type 02 is typically fitted with a special telescope sight, installed on aparallelogram mount well above the barrel. The sight mount is attached to the gun cradle.