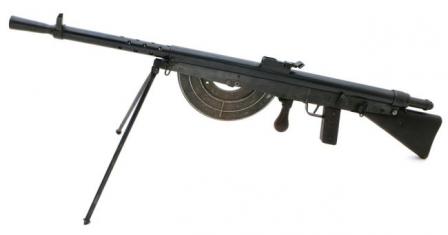 French army showed some advanced thinking in terms of small arms prior to and during World War One. For example, the French were among the first to adopt and mass-issue semi-automatic rifles. They also were among the first manufacturers of inexpensive, production-oriented squad automatic weapons, namely the infamous CSRG M1915, otherwise known as the Chauchat after the person who led the development commission (CSRG stands for Chauchat, Suterre, Ribeyrolle and Gladiator – the first three being the names of the designers and the last one being the name of the manufacturer, French bicycle-making company Établissements des Cycles “Clément-Gladiator”).
The entire gun was developed so its parts can be made in almost every mechanical workshop with generic lathe equipment, and with loose tolerances. This weapon was one of the lightest in its class, being about 2-3 kilograms lighter than the Lewis LMG; but it also was the least reliable, in part because of its complicated design and in part because of the crude machining and loose fitting of its operating parts, resulting in a wide variety of jams and stoppages. It was also prone to self-disassembly under prolonged firing, if parts became worn. Other sources of trouble were an open-side magazine which easily collected dirt and dust, and an outdated cartridge with a severe taper of the case combined with a large diameter rim.
In fact, the Chauchat light machine gun is often considered as the worst weapon of its class, ever produced in quantity. Nevertheless, the CSRG was produced in great numbers in spite of availability of better (and of course more expensive) weapons, such as the Hotchkiss Portative, Lewis or Madsen, and issued not only to French troops, but also to the American Expeditionary corps in Europe, first in the original French 8x50R chambering, and then in the .30-06 US chambering. Alongside the criticisms there are more favourable reports of its successful use and it is probably fair to say that, despite its problems, it was still better than nothing. Some sources claim that as many as 250,000 8mm M1915 plus almost 40,000.30-06 M1918 were built during the Great War. Several countries (such as Belgium, Greece and Poland) even used this weapon during the early 1920s, adapted to their domestic military ammunition.

The Chauchat light machine gun is long recoil operated, selective-fire weapon which fires from an open bolt. The barrel has an aluminum radiator with radial fins, and is enclosed by a tubular jacket with cooling holes and a conical flash hider at the front. The front of the barrel jacket serves as a muzzle recoil booster, using the pressure of the powder gases acting on the muzzle to increase the recoil force.
The barrel is screwed into the front of the long tubular barrel extension. This extension is bored internally to provide a channel for the bolt with a rotating head which has two locking lugs at the front. Bolt head rotation is controlled by cam tracks cut in the bolt body, which interact with projections made on the tail of the bolt head. There are two separate return springs, co-axially located in the tubular receiver – bolt spring and barrel spring. The receiver is of tubular shape, with long box-like trigger / magazine housing attached below.
When the gun is cocked, the bolt is held back by the sear, and the barrel is in the forward position. When the trigger is pressed, the sear releases the bolt, which goes forward, stripping the first cartridge from the magazine and forcing it into the chamber. Once the bolt head comes into battery, the forward movement of the bolt body forces it to rotate and lock the bolt to the barrel. At the end of the bolt movement the firing pin strikes the primer of the loaded cartridge and discharges the gun. The recoil of the discharge the moves the barrel group (barrel and its extension) along with the bolt group to the rear. At the end of the recoil movement the bolt is held by the sear, but the barrel is free to return forwards under the pressure of its own spring. This movement causes the bolt head to move relative to the now stationary bolt body, which in turn causes the bolt head to rotate and unlock from the barrel. The barrel then goes forward, leaving the fired case on the face of the bolt head. As soon as the fired cartridge case is clear from the barrel, it is ejected through the aperture on the right side of the gun by a spring-loaded plunger type ejector. If the gun is set to automatic fire and the trigger is still held back when barrel goes fully forward, it releases the bolt from the sear, so it can load and fire the next round.
The feed system uses single-stack box magazines of semi-circular shape, necessary because of the severely tapered and rimmed cases of the French service rifle cartridge. The magazine has large openings in the right wall, probably designed to lighten it and allow an easy visual check of remaining ammunition.
The trigger system is over-complicated as it requires a special link to release the sear in automatic fire once the barrel is in battery. The combined safety / fire mode selector lever is located on the left side of the trigger housing, above the pistol grip.
Basic furniture includes a wooden butt, a separate pistol grip, and a vertical foregrip located between the trigger guard and the magazine. A lightweight folding bipod is attached to the front of the trigger / magazine housing, below the barrel jacket.
Modifications:
Chauchat machine rifle, M1918: a modification of basic M1915 design, produced in France for the US Expeditionary Corps in Europe. This version was adapted for the US 7.62×63 (.30-06) rimless ammunition, and used extended magazine housing and slightly curved box magazines that held only 16 rounds. This was even less reliable than original 8mm version, because of the different ballistic properties of the American cartridge and manufacturing problems when producing .30-06 barrels with out-of-spec chambers.