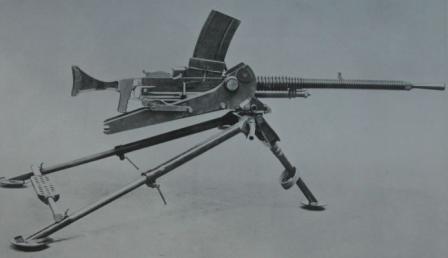 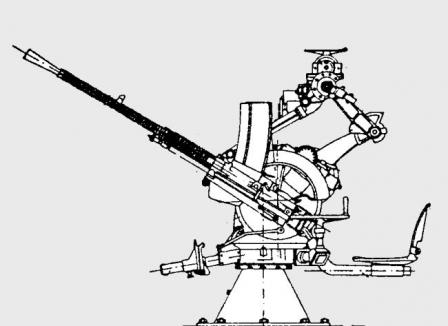 During the late 1920s the French army decided to adopt a large-calibre machine gun, for anti-armor and air defence duties, and after some experimenting it finally settled on 13,2mm calibre. As usual with the French army, most work was conducted in deep secrecy, but the outcome of the trials was the adoption of the heavy machine gun, developed by Hotchkiss, which happened in 1930. This weapon used a modified version of the American .50 calibre ammunition, loaded with bullets of slightly larger diameter – 13.2mm as opposed to the original 12.7mm; the cartridge cases were about the same, save for the larger diameter of the neck of the French load. The machine gun, known as the M1930, was more or less an enlarged version of the Hotchkiss M1922 light machine gun, with a similar gas-operated action and similar feed options, available in two versions – with side-fed strips or top-fed box magazines. What was most important was the fact that the French army and Navy also adopted a number of mountings for this formidable weapon, starting with the more or less usual tripods and up to sophisticated single, twin and quad AA mountings with pantograph sight mounts and movable seats for gunners. Twin and quad mountings were widely installed on trucks, railroad cars and ships. Versions of the heavy Hotchkiss were also widely exported during the pre-war decade. Japan, among others, was so impressed with these weapons that it acquired a manufacturing licence and built 13.2mm machine guns in significant numbers.

The Hotchkiss M1930 heavy machine gun is a gas operated, air-cooled, automatic-only weapon, which fires from an open bolt. The long-stroke gas system and locking using a tilting locking piece are similar to those of the Hotchkiss M1922 LMG, but the trigger system is much simpler; it uses a single or twin spade grip at the rear of receiver with a thumb-trigger, which is directly connected to the sear. Some infantry versions of the gun were fited with a pistol grip and a trigger at the rear of receiver, with shoulder stock attached behind. The rear part of the barrel (behind the gas block) is encased in a radiator with radial cooling fins. The Hotchkiss M1930 heavy machine gun could be had either in strip-fed or in magazine-fed versions. The magazine-fed type incorporates a bolt hold-open device, which locks the bolt open once the magazine is empty, even if the trigger is still held down. The bolt hold-open device is automatically disengaged once a fresh magazine is inserted into the gun.
The M1930 heavy machine gun was available on a wide variety of mountings, including light infantry tripods (with no AA capability), wheeled mountings, as well as single, twin and quad AA mountings, with ground fire capability and comprehensive aiming systems. Strip-fed guns were most often used for infantry applications on single mounts; magazine-fed guns were also widely used on multiple gun mounts, either ground or naval.