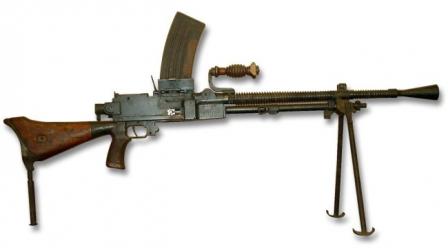 By the early 1930s they Imperial Japan Army (IJA) requested the development of a new light machine gun. In certain aspects the new gun, which was also designed by Kijiro Nambu, was a better weapon than its precursor, the Type 11 Taisho LMG – it was lighter and used conventional overhead box magazines instead of the side-mounted hopper. However, this weapon still used the same 6.5mm ammunition which had been found to be insufficiently lethal during the campaign in Manchuria. By this time (1936, the year of adoption of Type 96 LMG) there already was an “improved lethality” round, the 7.7x58SR Type 92, adopted in 1932 along with Type 92 medium machine gun. For some reason, the Type 92 ammunition was reworked from semi-rimmed to a rimless design, to become 7.7×58 Type 99 in 1939. With this cartridge available, the IJA requested the development of a new light machine gun firing this ammunition. Trials started in 1938 and included four different prototypes. As a result of these trials, the IJA selected a slightly updated version of the Type 96 LMG, rebarreled to 7.7 Type 99 ammunition, as the Type 99 light machine gun, and it was put into production by early 1941.
It should be noted that the 6.5mm Type 96 and 7.7mm Type 99 light machine guns were almost identical in appearance and had many similar parts. Also, for most of the war these guns were used side by side, as there were still plenty of troops issued with Type 38 rifles in 6.5mm and it was only logical to provide them with light machine guns in the same caliber.

The Type 96 light machine gun is a gas operated, air cooled, automatic-only weapon. The barrel is heavily finned and can easily be removed for replacement or maintenance. For easy replacement, it is fitted with a folding carrying handle. The gas system utilises a long-stroke piston located below the barrel, and a manual gas regulator with five settings.  The locking system features a rising/dropping locking block located in the receiver below the bolt and operated by inclined surfaces on the gas piston rod.  For locking, this block rises up to engage a cut on the underside of the bolt. Upon discharge, the rearward movement of the gas piston rod causes the locking block to fall down and unlock the bolt. Feed is from box magazines, inserted from the top. The magazine housing is fitted with a side-opening dust cover. The curved box magazines hold 30 rounds in two rows. Firing controls include a single trigger and a manual safety, located on the left side, in front of the trigger guard. The gun is capable of automatic fire only, although with the relatively low rate of fire of the Type 96 it was possible to fire single shots by briefly pulling the trigger.
Standard furniture includes a folding bipod attached to the gas block, a wooden pistol grip and a wooden butt with a steel buttplate. Unlike earlier Japanese machine guns, the Type 96 is not fitted with an internal oiler; instead, oilers are incorporated into the magazine loading tool. One rather unique accessory to both the Type 96 and Type 99 light machine guns is a standard infantry bayonet, which can be attached to the gas block below the barrel. Standard sights are of the open type, offset to the left to clear the overhead magazine, and marked up to 1,500 meters. Both versions can be fitted with a long telescopic sight with fixed 2.5X magnification, which is also offset to the left.

Modifications:
Type 99: This is a Type 96 machine gun modified to accept the more powerful 7.7mm Type 99 ammunition. The most notable external changes include the addition of a flash hider on the barrel and a rear monopod under the butt. A less obvious, but probably more important change was adoption of an adjustable headspace mechanism, built into the barrel lock. Because of the more powerful ammunition, Type 99 gun has higher cyclic rate of fire than its predecessor.
Type 99 Paratroopers': this is a limited production version of the Type 99 LMG intended for paratroopers' use. It has a quick-detachable stock and a forward-folding pistol grip. For deployment, the barrel and butt were detached from the gun, the pistol grip and bipod folded, and the entire set then packed into a special carrying bag, which was carried by the soldier to the.