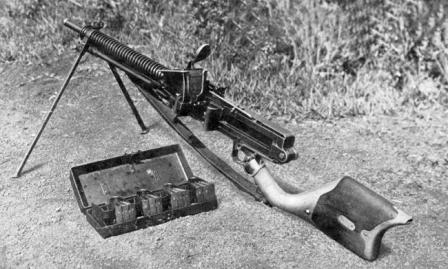 Type 11 light machine gun, loaded and ready to fire. Note that the hopper is filled with clips, and additional clips are held in special carrying case next to the gun.

In 1922, the Imperial Japanese Army (IJA) adopted the Type 11 Taisho light machine gun, an unusual design created by the Gen. Kijiro Nambu. This weapon used one of the most unusual feed systems of the time, with a fixed hopper refilled with standard rifle clips. Firing the 6.5mm rifle ammunition, this weapon was reasonably light, although the side-mounted hopper resulted in an awkward balance. The basic action was an adaptation of the Type 03 MMG.

The Type 11 machine gun is a gas operated, air-cooled, hopper-fed automatic only weapon. It employs a detachable barrel, which is finned at the front (ahead of the gas port). The rear part of the barrel is enclosed within a tubular jacket which fits firmly around the barrel to provide better cooling, as the external surface of the jacket is heavily finned. The barrel jacket is screwed to the receiver, but the barrel removal procedure requires a complete disassembly of the gun.
The gas system employs a long-stroke gas piston, located below the barrel. The gas block is provided with a manual gas regulator, the gas piston tube is attached to the barrel jacket. The locking system is basically the same as in the Type 03 machine gun; it uses the same vertically-sliding locking block which is operated by cams on the operating rod and its rear vertical projection. To engage the receiver with the side locking lugs, the locking block is lowered; to unlock it, it is lifted.
The firing mechanism is relatively simple and provides only automatic fire. The trigger, sear and manual safety are mounted on a separate unit, which also forms a metallic tubular pistol grip and a base for the shoulder stock. Firing is from an open bolt.
The feed system is one of most unusual of its kind, as it employs a side-mounted hopper which is filled with six standard stripper clips, holding five rounds each. Clips are stacked in the hopper and pressed down by a swinging top cover, which can be opened up and forward for loading or unloading.The bottom of the hopper is fitted with a toothed rack, which moves laterally to slide the cartridges sideways (from right to left) to the feed rightmost cartridge from the lowest clip into the receiver. The rack is operated through a cam slot cut in the operating rod. Once all five rounds from the clip are expended, the clip can freely fall down through an aperture in the bottom of the hopper, giving way to the next full clip. The hopper can be topped up with loaded clips at any time, but to do so in a quick manner it is desirable to leave this function to the second member of the crew. The hopper can be easily detached from the gun for maintenance or repair. Because of the inherent lack of primary extraction, this gun is also fitted with an integral oiler. When entering the feed position, each cartridge trips the oiler valve, and a small amount of oil is then squirted on the cartridge just before it is fed into the chamber.
The standard furniture for the Type 11 LMG includes a folding bipod attached to the barrel jacket, and a wooden butt which is attached to the base of the pistol grip. Unlike some other pre-WW2 light machine guns, it also can be used from a “sustained fire” tripod, although the weapon itself is hardly suitable for a sustained fire role.