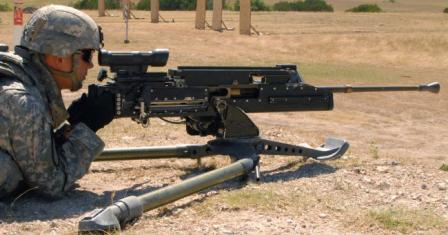 The LW50MG (Lightweight .50 caliber Machine Gun) is the new product of the Armament and Technical products branch of the US-based General Dynamics corporation. This weapon is a direct offspring of the marginally successful XM-307 ACSW / XM-312 program, and current plans are to field first production units of the LW50MG in around 2011. The first US military units to get this highlymobile infantry support weapon are Airborne, Mountain and Special Operations (SOCOM) troops. The primary role of the LW50MG is to augmentvenerable but overly heavy .50 caliber Browning M2HBmachine guns in mobile units. The LW50Mg can provide effective means to combat vehicles (including lightly armored ones), enemy snipers,infantry behind typical urban covers etc.

The design of the LW50MG is based on the recoil-reducing action, developed for 25mm XM-307 ACSW grenade launcher.The barrel is locked by the conventional rotating bolt, which, in turn, is operated by more or less conventional gas system. The bolt group moves within the barrel extension, which, along with the barrel and gas system, can recoil inside the gun housing. The LW50MGfires from the open bolt, and at the moment of fire the recoiling group (barrel, barrel extension, gas system and gas drive) is in its rearmost position, resting against the spring. When trigger is pulled to fire the gun, the barrel group first is released to slam forward. as soon as its acceleration results in sufficient kinetic energy / inertia build-up, the sear is released and the cartridge is fired while barrel/bolt group is still moving forward. Therefore the recoil of the discharge first had to overcome the inertia of the recoiling group, and only then group began to recoil back, compressing the return spring. At the same time gas drive unlocks the bolt, and retracts it within the barrel extension, extracting and ejecting a fired case. This somewhat complicated design results in significantly reduced peak recoil, which allows to lighten both the gun and the mount. The price of this reduction in recoil is complicated (and expensive) construction and low cyclic rate of fire. The feed is using standard .50 caliber metallic belts,from left side only. Current prototypes of LW50MG are fitted with dual spade grips with thumb trigger in between, and installed on special lightweight tripods. Guns are fitted with Picatinny rails on the housing to permit installation of the various sighting and target illuminating / pointing devices and equipment.