Details of the barrel jacket with cooling ports and carrying handle. 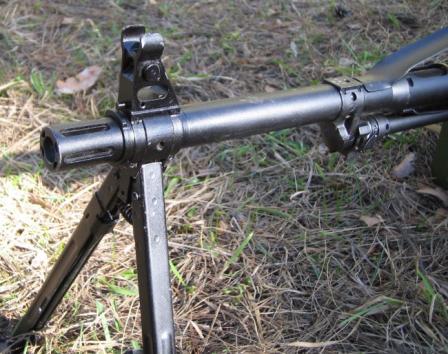 View of the muzzle and bipod of the PKP Pecheneg machine gun.

The Pecheneg light machine gun was born from Russian experience┬Āin Afghanistan and recent local conflicts, especially the continuous fight with insurgents and terrorists in Chechnya. The name ‘Pecheneg’┬Ācomes from an ancient aggressive tribe who lived in what later became Russia (sometimes transcribed as┬ĀPetcheneg).┬ĀBasically, Pecheneg is a standard 7.62x54R PKM machine gun without the rapid barrel-change option and is┬Āintended for use from an integral bipod as a squad support weapon. It can provide much more sustained firepower than the standard-issue RPK-74 and the 7.62x54R cartridge offers a longer effective┬Ā range (a rather useful feature in mountainous Chechnya or Afghanistan).┬ĀNot less important, it provides better penetration of light structures and improvised cover as┬Āused by insurgents in urban and forest environments. Currently Pecheneg is being issued to certain Russian Army and Internal Affairs ministry Spetsnaz units operating in Chechnya.

The ŌĆ£PechenegŌĆØ LMG can be considered a modification of the PKM machine gun,┬Ācreated for one specific┬Ātactical role: as a true squad-level light machine gun for mobile infantry and Spetsnaz troops.┬ĀThe key difference from the parent design is the barrel, which is not intended to be replaced in the field (although it can be removed for inspection and maintenance). The barrel is somewhat heavier than that of the PKM, and has radial cooling ribs. This is enclosed in a steel jacket, which runs up to the muzzle to provide forced air cooling,┬Āsimilarly to the┬ĀLewis machine gun of WW1 vintage. Cooling air enters the jacket through oval windows at the rear of the jacket, and exits at the muzzle. Early versions of the Pecheneg had a standard PKM-type flash hider, which resulted in significant muzzle blast once the gun warmed up. Current production guns have a specialised flash hider that eliminates this problem. At the rear of the jacket there is a carrying handle permanently attached to it. This handle has a characteristic elongated profile, as it is also intended to protect the line of sight from mirages generated by the hot barrel. The manufacturer claims that the Pecheneg can fire 600 rounds in continuous sustained fire without any danger to the barrel.

Another change from the parent design is the location of the integral, non-removable folding bipod which is placed near the muzzle. This feature is said to improve stability and long-range accuracy when firing from the bipod, however┬Āit also limits the arc of fire available without┬Āshifting the position of the┬Ābipod or shooter. Another consequence of such placement is that the Pecheneg is less comfortable to fire from the shoulder or the hip, as it does not have a handguard and the bipod is located too far forward to be used to hold the gun. However, the Pecheneg has sling swivels and can be fired from the hip using a sling and carrying handle to hold the gun.

In all other respects (action, feed, sights, stock) the Pecheneg is┬Āthe same as┬Āmodern┬ĀPKM machine guns. It also retains the standard┬ĀPKM mounting interface and therefore can be used from the same tripod, but is always issued as a light machine gun (without tripod mount).