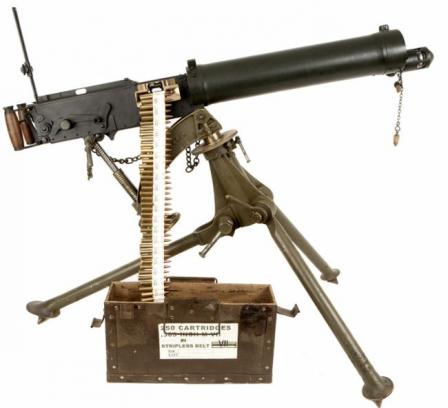 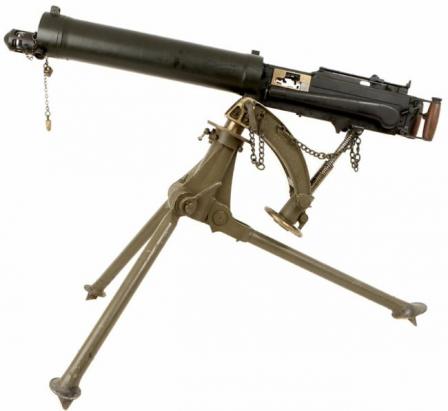 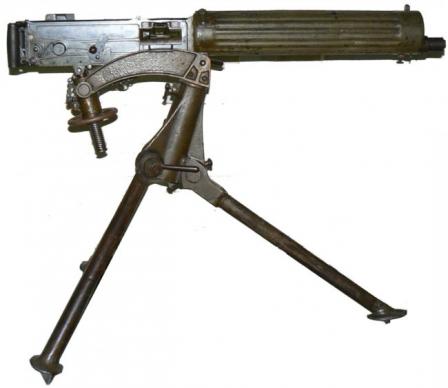 British army used Maxim machine guns since the last decade of the 19th century, and kept these in stocks until about 1928. However, as early as in 1911 Vickers Company designed an improved machine gun, which stayed in first-line British service for more than fifty years.  This was the famous .303 caliber Vickers machine gun. In its basic design it was the same Maxim gun, although it was considerably lightened. The key to lower weight of the Vickers gun was an inverted toggle-lock, which broke upwards instead of original downward direction of Maxim guns.This permitted for more compact receiver. A number of minor other changes was also made, and the British army officially adopted Vickers Mark I gun in 1912. This was an excellent weapon, extremely durable and capable of tremendous amount of firepower. With proper handling, it could sustain a rate of fire of 10 thousands rounds per hour, an do that for hours, if not days, providing a necessary supply of belted ammunition, spare barrels (barrels were changed after each 10 000 rounds) and cooling water. In fact, it was not unusual for many Vickers guns to fire as much as 100 000 rounds during just one of many continuous battles of the World War one. These guns were heavy, but this was less of a problem during stationary defensive battles in trenches of WW1; what was more important, these guns were reliable and durable, and troops had a great confidence in their Vickers guns.Without much changes, Vickers machine guns survived through 1920s and 1930s and again were used with great effect during the World War two.In fact, Vickers machine guns were among the longest-living 'first generation' machine guns, as these were declared obsolete by British Army only in late 1960s. Royal Marines, who knew how to use good guns,despite of age, kept some Vickers guns in stock as late as 1980s.Finally, it was replaced by the lighter and much more modern (although less potent in terms of sustained firepower) L7 / FN MAG GPMG.

The basic toggle-lock action,patented by Hiram Maxim, used two struts, connected by the hinge, and located between the breech block and a barrel extension in such a manner that when breech block was in battery, struts formed a straight line and transferred the pressure, exerted by the hot powder gases through the base of the cartridge, directly to the barrel extension.This caused the entire barrel / extension / breech block group to recoil inside receiver, against the tension of the spring, located under the separate cover outside of the left receiver wall. After short recoil, the cocking handle, which was located on the rear axis of the toggle system, struck the pin installed on the right receiver wall.This caused the cocking handle to rotate down and forward, thus breaking the toggle up (unlike the original Maxim). This permitted for more compact and light receiver, compared to 'traditional' Maxim-type guns such as German MG 08 or Russian M1910. The cocking handle served as both unlocking member and a breech block accelerator, as its shape caused the toggle to open rather fast. During the opening movement of the breech block, the empty cartridge was extracted from the barrel, and the separate breech face,with integral T-slot that held the cartridge case by its rim, was slid downward, to put the fired cartridge case below the barrel and in alignment with short extraction tube, that was located under the barrel and emerged from the front of receiver. At the same time, the fresh cartridge that was picked by the T-slot during the previous cycle, was lowered and put in line with the chamber. The closing movement of the toggle was controlled by the return spring, located on the left side ofthe receiver. Unlike most other weapons, the return spring was extended during the recoil, rather than compressed; it was attached to the pivoting lever, located co-axially with cocking handle on the rear toggle axis. Thus, upon counter-recoil cycle, this spring forced the toggle to straighten up from its bent position, pushing the breech block (with fresh cartridge above and fired case below both held in in the T-slot) forward, and entire barrel / breech block system into the battery. Upon final part of closing movement of the bolt, the sliding breech face was risen up, to leave spent cartridge in the ejection tubeand to catch the next fresh cartridge from the belt by its rim. If the trigger was still pushed, the firing pin was released by the trigger ling, which engaged the sear, built into the breech block. The trigger it self was located between dual spade grips, at the backplate of receiver; it was pushed by thumbs. Some guns were used with optional muzzle booster, which increased rate of fire (a feature, most desirable for anti-aircraft applications).
The feed system used non-disintegrating belts, made from cloth or tarpaulin, with metallic struts. Feed was from the right side only; feed system was operated through the horizontally pivoting pin / levers system by recoiling barrel group. Some Vickers guns were provided with optical sight bracket on the left side of receiver. Standard sighting equipment included a front sight,installed at the front of the water jacket, and a folding rear sight,adjustable for range up to 3000 yards, with diopter-type aperture.
British army used mostly a standard rifle ammunition (“Ball Mk.VIIz”) for its Vickers gun, although a special “machine gun only” round was developed especially for use in medium machine guns; known as “Ball Mk.VIIIz”, this round featured a boat-tailed bullet and extended the maximum range of the gun for about a thousand yards.