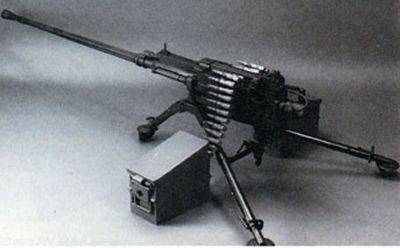 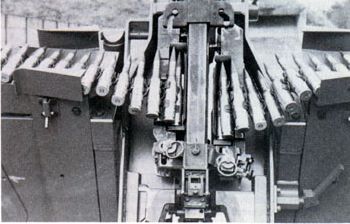 First announced in october 1983, the BRG-15 was designed to replace aged Browning M2HB .50 cal (12.7mm) heavy machineguns, and was, probably, the most powerful machine gun ever made, outperforming even Soviet KPV 14.7mm. The BRG-15 could pierce 10mm of steel armour at 30 degrees at the distance of 1350 meters, or, in other words, capable to defeat armour of almost any APC at the distances of 1000 meters and beyond.

The BRG-15 had conventional, gas operated action with rotating bolt, locking into the barrel extension. It had the dual feed, with two belts entering from the top of the receiver, and with bottom ejection port. The gun had feed mode selector at the rear of the receiver, and, when used on tripod mount, a set of spade grips to control the gun. After the testing it was found that the 15mm ammunition caused fast barrel wear, so gun and ammunition had been redesigned: new bullets had driving bands to follow the rifling (like the large caliber artillery shells), and barrel caliber was increased to 15.5mm and barrel had been lenghtened.

In the final shape the BRG-15 was a very potent gun, but due to financial difficulties of the FN, the company decided to shelve this project in the early 1990s, in the favour of the P90 PDW / submacinegun.