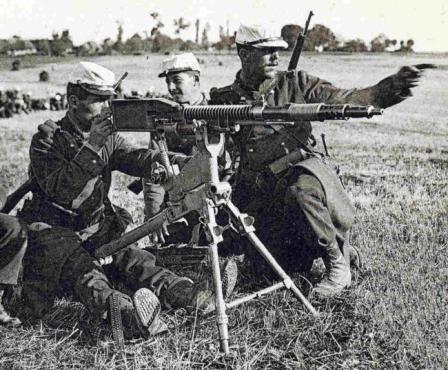 The Puteaux Mle 1905 machine gun was developed by French army officers at the Government-owned facility Atellier de Puteaux. It seems that the designers of this weapon took every measure to make the mechanism different from that of the contemporary Hotchkiss machine guns, which showed good potential but were just “not invented here” (that is, not invented by the Army and not covered by the contemporary blanket of secrecy). The only thing from Hotchkiss that was adopted was also probably the worst thing about this design,and it was the strip feed system (with feed strips similar to, but not compatible with Hotchkiss). The system turned out to be so bad that it was rapidly redesigned into the St.Etienne M1907 machine gun, which, however, still was only barely better than the original. The original Puteaux M1905 machine guns were quickly withdrawn from front line service, but saw some action in French colonies.

The Puteaux M1905 machine gun is a gas operated, air-cooled, full automatic weapon that fires from an open bolt. The barrel was easily removable and fitted with a finned brass radiator. This machine gun uses a Bang-type gas action, with a sliding cup placed around the muzzle which is blown forward by the muzzle blast to operate the action through a somewhat complicated linkage, which connects the muzzle cup to an even more complicated bolt locking / unlocking system. This system employs a toothed rack which, when cycled by the gas action,rotates a large gear which has a projecting stud on its side. Upon rotation of the gear, the stud pulls the bolt back and forth through the cam slot machined in the rear part of the bolt. Locking is achieved by putting the stud on the operating gear into the dead point (in line)position in regard to the bolt and barrel axis. The return spring is located around the muzzle and is exposed to the elements and also prone to overheating, thus losing its strength during prolonged fire. The muzzle cup is equipped with a mechanism that permits adjustment of the bullet / powder gases exit hole at the front. This, along with the adjustable buffer in the action, enables an adjustable rate of fire,with cyclic rates of between 30 and 600 rounds per minute.The firing controls include a single spade grip, made from brass, and a trigger in front of it. A rotary cocking handle is located on the left side of receiver.The feed is from rigid feed strips, made from steel. These are fed from left side to the right, with cartridges located underneath the strip.The sights are open, with a folding front post, located on the barrel,and a tangent type rear, adjustable for ranges between 300 and 800 meters.M1905 machine guns were used from solid tripods with traverse and elevation mechanisms.