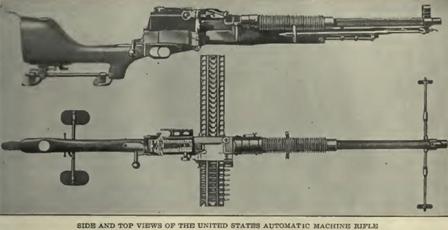 The Hotchkiss Portative light machine gun was designed by famous French arms-making company Hotchkiss in around 1907, and was produced for both domestic use (mostly on early aircraft) and for export. This weapon was an improvement over the original Hotchkiss medium machine gun, and retained a similar gas operated action and used the same feed strips, although the feed system was literally turned upside down compared with the preceding gun. The entire weapon was also made lighter and more compact, and it was used by the USA and the UK, in their respective service rifle calibres. Commercial versions of this gun were also sold to Belgium and Sweden.
The American version was known as Benet-Mercie machine rifle, M1909. It was the basic Hotchkiss Portative adapted to .30-06 US cartridge, and manufactured either by Hotchkiss in France or by the Springfield Armory and Colt in USA. Total US stocks of M1909 machine rifles was less than 700 guns, and they earned ther fame (or infame) during US raid to Mexico in 1916 against Pancho Villia forces, when four guns failed to provide support to troops during night attack of Villistas. It later turned out that this failure was largerly caused by the improper and insufficient training of gun crews. During the WW1, most Benet-Mercie machine rifles were used to train the US troops before sending them to Europe.
British version was known as .303 Hotchkiss Portable Machine gun Mark I, officially adopted for cavalry service in 1916. It was again a slightly modified Hotchkiss Portative, adapted to .303 British ammunition; other changes include a separate pistol grip with a simplified detachable metal butt, the bipod was replaced by a light and compact tripod, and a carrying handle was added. Because of its lighter butt and shorter barrel, it was a little lighter that its US or French siblings. It was produced in the UK by the Royal Small Arms factory in Enfield. It was also used as secondary armament on earliest British tanks, with butt removed, and using semi-rigid belts as opposed to rigid strips, used in infantry and cavalry versions.

The Hotchkiss Portative is a gas-operated, air-cooled, selectively fired weapon that fires from an open bolt. Heavy air-cooled barrel is fitted into the finned radiator to provide better cooling; manual for the gun recomended to pause firing after about 300 rounds of continuous fire to let the barrel cool down, but also stated that, in emergency situations, up to 1000 rounds can be fired without pause through the single barrel, causing no significant harm to the gun. Gas system uses a gas block below the barrel, with a multi-position gas regulator; the gas piston is of long stroke type. Locking is achieved by rotary nut (called a “fermeture nut” in contemporary literature). This nut is placed around the breech, and has an interrupted thread on its inner surface. Rotation of the nut is controlled by a lug, which projects below and engages the cam slot cut in the gas piston rod. Upon discharge, the gas piston travels back, and the cam slot rotates the nut clockwise, to disengage its interrupted threads from the respective threads cut into the bolt head. Once the unlocking rotation is completed, the gas piston retracts the bolt to complete the firing cycle.
The cocking handle is made as a separate unit, and projects from the rear of the receiver. It does not reciprocate when the gun is fired and, furthermore, its rotation controls the mode of fire, that is, semi-automatic or full-automatic mode.
The feed system uses the same rigid strips as earlier Hotchkiss guns, although in the Portative model the strips are positioned with cartridges below the strip, and inserted from the right side of the weapon. A set of levers, operated by the upper projection on the bolt, indexes the strips during each firing cycle. In some cases, especially in tank and aircraft versions, semi-rigid belts assembled from short, 3-round strips replaced the original one-piece strips.
Standard furniture includes a wooden shoulder stock with a semi-pistol grip and folding shoulder rest (or a separate pistol gip and a metallic butt as in the case with British Hotchkiss Mk.I portable machine gun), and a light folding bipod attached near the muzzle. Additionally, a monopod (rear leg) of adjustable height or a special bipod support could be installed under the butt to provide improved stability to the gun. Various light tripods also were available for this gun.