The left side view on the XM-29 OICW, showing its controls on the sighting unit. 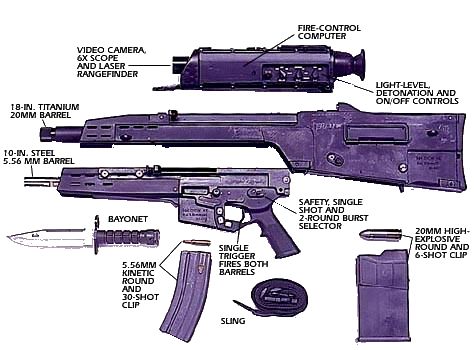 The major components of the XM-29.

The history of the one of the most ambitious projects in the history of small arms, known as the OICW, or the Objective Individual Combat Weapon, began late in the 1986, when the US Army Infantry School at Ft. Benning published a military paper, named "Small Arms System 2000" (SAS-2000). Despite the current trends towards the caseless and fleschette ammunition and appropriate weapons, researched and developed under the ACR program (see HK G11 and Steyr ACR entries for some details), this paper stated that the conventional small arms already reached its technological peak, and the only way to increase the hit probability in the small arms is to introduce a weapon that will fire explosive and fragmentation warheads, combined with the smart fusing and sighting / aiming technologies. While the most small arms research during the late 1980s in the USA was conducted under the ACR program, the idea first developed in the SAS-2000 was supported by another US military paper, published in 1989 by the US Army TRADOC (Training & Doctrine) center. This paper, called "The Small Arms Master Plan" (SAMP), requested for a family of infantry "Objective" weapons, namely the Objective Individual Combat Weapon (OICW), Objective Personal Defense Weapon (OPDW), and the Objective Crew Served Weapon (OCSW). The SAMP stated that such weapons must utilize the latest developments in computers and visual technologies, as well as in the small arms, and combine both high explosive warheads and traditional bullets fire capabilities in a single weapon, that should be fielded circa 2000. Of cause, the timelines and most of the weight and cost requirements set in this paper looked unrealistic from the start, but the development of the Objective weapons began in the early 1990s.

During the early stages of research and development in the mid-1990 one out of the two teams was selected as a winner for further development contract. This team is lead by the US based Alliant Techsystems corporation (ATK), with the Heckler-Koch (Germany), Brashear and the Omega companies (both of USA) as the other team members. The ATK is responsible for system integration, and also develops the 20mm Air Burst munitions; HK is responsible for both the 5.56mm rifle and the 20mm grenade launcher; Brashear works on the sighting equipment and Omega provides the training means. The resulting weapon was type-classified by the US Army as the XM-29 circa 2002, and is scheduled to enter the service during the year 2008 in limited numbers. It will be then consequently upgraded with the new technologies then available. Present plans for fielding the M-29 are to issue four units per one infantry squad of 9 men. Early in the 2002 the XM-29 test weapons were successfully tested with the newest 20mm HEAB (High Explosive Air Bursting) munitions, which will be a major "kill factor" for the M-29 weapon. At the same time the "kinetic energy" part of the XM-29 was type-classified as the XM-8 light rifle, and, in the near future, could possibly  replace the current Colt M4 carbines as a standalone compact conventional small arms.

XM29 status update (September 2005): following the increase of caliber of OICW grenade launcher component from 20 to 25mm, in 2004 it has been decided to split the OICW system into two separate weapons, the 5.56mm XM8 modular assault rifle (OICW Increment 1), and the 25mm XM25 airburst assault weapon / grenade launcher (OICW Increment 2). Development of the complete XM29 (OICW Increment 3) system has been shelved, and will be resumed in the future only if all current problems with OICW Block 1 rifle component are solved, and weight constraints of entire system are met.

XM-29 OICW Description.
The XM-29 is a combination weapon, which has the 20mm semi-automatic, magazine fed grenade launcher as its primary part, and the 5.56mm compact assault rifle as its secondary part. Both parts are assembled into the single one-man portable unit, with the addition of the target acquisition / fire control system (TA/FCS), which is an essential part of the whole system. The XM-29 will become an integral part of the future Land Warrior system, capable of communicating with the other parts of this system, including the tactical computers and helmet-mounted displays.

The grenade launcher is capable to fire in semi-automatic mode only, and is gas operated. It has a bullpup layout with the detachable box magazine located in the butt of the weapon. The rifled barrel is used to launch the 20mm grenades up to the 1000 meters range with good accuracy. In the standard configuration most of the fire controls for the grenade launcher part are located on the rifle part, including the single trigger for both firing modules. It is quite possible, however, that the separate stock will be developed for the grenade launcher part, so it will be possible to use it without the rifle part attached. The launcher has the provisions for the TA/FCS system to be mounted on its top, and the appropriate interfaces, so the data provided from the TA/FCS can be used to program the 20mm grenade fuses. These fuses, used for the 20mm HEAB ammunition, has multiple mode of detonation, including the direct impact mode and the Air Burst mode. In the latter mode the fuse is pre-programmed to explode the warhead at the preset range, which is calculated during the flight by counting the number of the grenade rotations.  This allows do defeat targets without the direct impact, using the blast and fragmentation effect of the high explosive warhead. This is a major advantage over the present small arms, which in most cases require the direct hit on the target to be effective, as it allows for greater aiming errors, and also makes possible to defeat targets in defilade, like the trenches and so. The high explosive warhead also has the advantage of not being dependent on its velocity to be effective, so unlike with the bullets, its effectiveness does not decreased with the increase of range. The disadvantages of this system is the extreme complexity of the electronic fuses, which results in the high price of a single round of ammunition. The present plans stated that the one HEAB round must cost about US $25, and it is still to be seen which will be an actual price when the M29 system will be fielded. It is interesting that the present design of the HEAB ammunition actually has two small HE warheads at the front and at the rear of the projectile, with the electronic fuse module located between them. While the HEAB is considered a primary round for the 20mm grenade launcher, it is entirely possible do develop a low cost, direct hit only anti-armour 20mm round with Shaped Charge warhead, which will be effective against lightly armored vehicles (APC, MICV and alike) and various hardened targets.

The rifle, or "kinetic energy" part of the XM-29 system, on the other hand, is a fairy conventional, short-barreled assault rifle, derived from the Heckler-Koch G36 assault rifle. The basic "rifle" part of the XM-29 has no buttstock and no own sights, and thus can be used separately from the whole system only as emergency, personal defense weapon. While being mounted to the whole system, it can be used for a close quarters work, both defensive or offensive (the 20mm grenade launcher has it minimum range of fire of about 50-100 meters), or as an low-cost, low intensity medium range offensive weapon. Most of the XM-29 system controls are built into the "rifle" part, around the trigger guard.

The target acquisition / fire control system (TA/FCS) is the most expensive and complicated unit of the whole system, since it must combine day and night vision capabilities, laser rangefinding unit, ballistic computer and various interfaces to the grenade launcher and external systems. It is used to find the targets in any light and weather conditions, determine the range to the target, calculate and display the aiming data, so the grenade or bullet could be fired to the desired point of impact, and then supply the data to the grenade launcher, so the range could be preset into the grenade fuse. In the case of damage to the TA/FCS the 20mm grenade launcher still can be used in the direct impact mode, as well as the rifle part of the system.

The current research and testing showed that the XM-29 can be up to 500% more effective than the present small arms, but it is still to be seen if all the requirements will be met in the resulting system, especially regarding to the reliability of electronic components, weight, and, at last but not at least, the unit price.