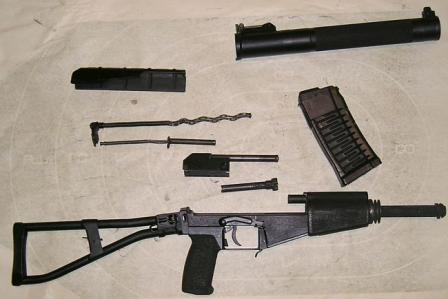 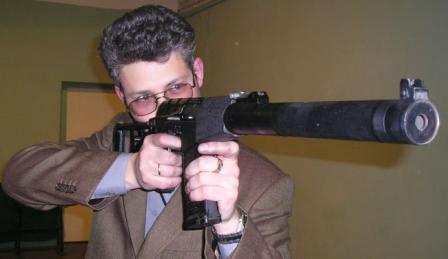 The Special Forces, generally known as “Spetsnaz” (after the Russian term “Voiska Spetsialnogo Naznacheniya” – Special Purpose Troops), always played a key role in Soviet Military Doctrine. One of the aspects of every Special Forces is that they prefer to operate stealthily, with as little sound and flash as possible from their weapons. The first generation Spetsnaz weapons were no more than  AK and AKM rifles, fitted with quick-detachable sound suppressors, and loaded with special subsonic ammunition with heavy bullets. Apparently, this was not enough, since in the mid-1980s the development of new, more effective silenced weapons was initiated. At first, designers from TSNIITOCHMASH in the city of Klimovsk developed a special-purpose 9 mm subsoniccartridges, known as 9×39 SP-5 and SP-6, based on necked-out 7.62 x 39 case. These cartridges were fitted with heavy (about 16-17 gram) standard “ball” or armour piercing bullets, with muzzle velocities about 280-300 meters per second.

Having the ammunition, the team at TSNIITOCHMASH, lead by P. Serdyukov, developed a family of integrally silenced 9 mm weapons, which included the VSS “Vintorez” silenced sniper rifle and the AS “Val” silenced assault rifle. Both weapons are based on the same action and integrally silencedbarrel. AS is widely used by Russian Army recon units, as well as by MVD (Internal Affairs Ministry) and FSB (Federal Security Bureau) Special Forces.

The AS is a gas operated, integrally silenced weapon. The receiver is machined from steel forging for improved strength. The long stroke gas piston is located above the barrel, and rigidly attached to the bolt carrier. The rotating bolt has six lugs and locks into the receiver. The front part of the barrel, ahead of the gas port, has several sets of holes, drilled at the bottom of the rifling grooves. These holes are used to bleed some of the gun gas into the integral silencer. The trigger unit is somewhat similar to that of the Czech-made Sa. Vz.58 assault rifle, and is striker-fired. The safety lever is similar to the one found on all Kalashnikov-type rifles, but the fire mode selector is a separate cross-bolt type button, located within the trigger guard, just behind the trigger. The open sights are graduated up to 400 meters in 25 meter increments, but the actual effective range is about 200-300 meters due to the rainbow-shaped trajectory of the subsonic bullets. The AS is optimized for high performance armor piercing 9 x 39 ammunition, designated as SP-6, but can also fire “ball” type SP-5 ammunition, intended for VSS sniper rifles. The pistol grip and the short forearm are made from polymer, the skeletonized, side-folding butt is made from steel tubing. The AS rifle has a standard side-mounted rail for optical, night vision or red dot scopes. It has no provision for mounting a bayonet or a grenade launcher. The integral silencer could be easily detached for maintenance, repair, or compact storage, but the rifleshall not be fired with the silencer removed due to safety and reliability issues.