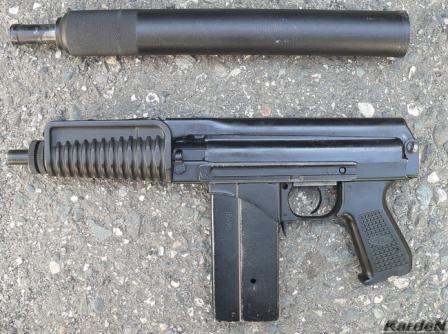 The 9A-91 9×39 mm compact assault rifle was originally developed as a part of the A91 family of compact weapons, which included versions chambered for 7.62 x 39, 5.45 x 39, 9 x 39 and 5.56 x 45 ammunition. Of those, only the 9 mm version survived and entered small-scale production at the Tula Arms Factory in 1994. Designed by the famous KBP design bureau in Tula, the 9A-91 was originally intended for an Army PDW (Personal Defense Weapon) role, but instead found some favor in the ranks of MVD and Russian police troops, as a less expensive (and somewhat more versatile) equivalent of the SR-3 “Vikhr” compact assault rifle. The 9A-91 also served as a basis for a silenced “para-sniper” weapon, the VSK-94, also chambered for 9 x 39 ammunition.

The 9A-91 rifle is a gas operated, rotating bolt weapon, which utilizes a long stroke gas piston, located above the barrel, and a rotating bolt with 4 lugs. The receiver is made from steel stampings; the forend and pistol grip are made from polymer. The steel buttstock folds up and above the receiver when not in use. The charging handle is located on the right side of bolt carrier (it was welded solid on early production guns, or can be folded up on current production guns). The safety / fire selector lever was located at the left side of the receiver on early guns, but was since relocated to the right side, to clear space for the sight mounting rail. Safety / fire selector lever has 3 positions and allows for single shots and full automatic fire. The flip-up rear sight has settings for 100 and 200 meters range, but the relatively short sight base and steep trajectory of the subsonic bullet effectively restricts the 9A9-1 to ranges of about 100 meters, at which the 9 x 39 ammunition is clearly superior in penetration and hitting power to either 9mm pistol ammunition from submachine guns, or 5.45 and 5.56 mm ammunition from compact assault rifles like AKS-74U or HK-53. To aid aiming, current production 9A-91 rifles are fitted with mounting rail on the left side of receiver, which allows instalation of mounts with day (telescope or red-dot) or night (IR) sights.