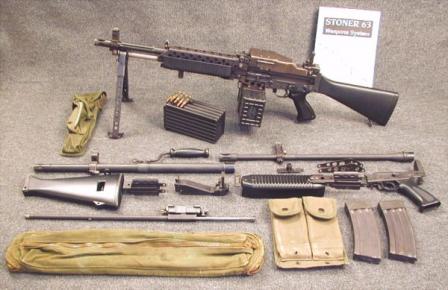 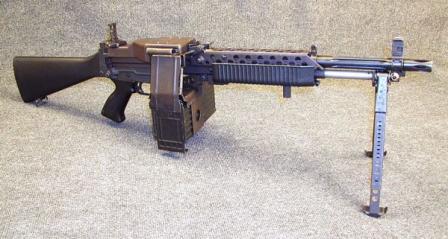 Stoner 63A weapon in Commando light machine gun configuration. Note that it is late version, with right side belt feed.
photo: Western Firearms 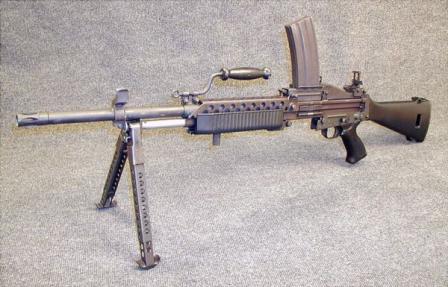 Stoner 63A weapon in magazine-fed light machine gun configuration, with longer and heavier barrel. Note that sights are offset to the left because of overhead magazine.
photo: Western Firearms 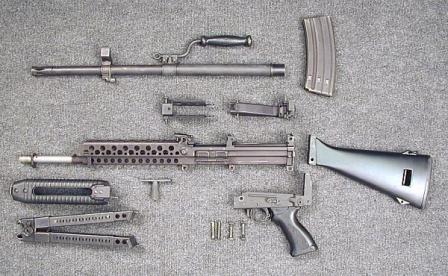 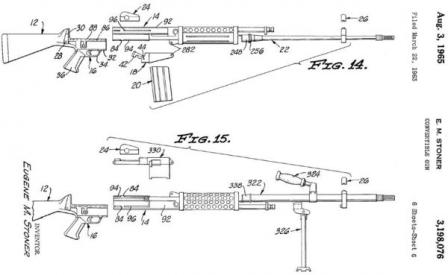 Eugene Stoner, one of designers of M16 rifle, left ArmaLite in about 1961 and joined the Cadillac Gage Corp. There he began development of an entirely new weapon system. It was probably the first truly modular system, that consisted of about fifteen subassemblies which could be assembled in any configuration, from an assault rifle and short carbine up to a lightweight or even a general purpose machine gun. First prototypes, chambered for 7.62x51mm NATO ammunition, appeared in 1962, known as Stoner 62. Just a year later Stoner turned out a new system, chambered for 5.56×45 M193 US service round, and known as Stoner 63. This system, developed and promoted until the early 1970s, was extensively tested by the US military as the XM22 (Stoner 63A rifle), XM23 (Stoner 63A carbine), and the XM207 (light machine gun with belt feed). The only military application of the Stoner 63 system, however, was the Mk.23 model 0 belt-fed light machine gun configuration, used in limited numbers by US Navy Special Forces and Marine Corps in Vietnam. In general the Stoner system, while having the advantages of modularity and interchangeability of parts and thus great flexibility in tactical use, was somewhat too expensive and also slightly over-complicated for a dedicated light machine gun (or any other configuration). It was also somewhat dirt-sensitive and required much attention and maintenance.
Overall, some 3,500 to 4,000 Stoner 63 weapon kits were produced between 1962 and 1971. Of those, some 2400 Stoner 63 Light machine guns were purchased by US Navy for issue to special forces in Vietnam, and about 100 more were bought for US Navy S.E.A.L.'s in improved Mk.23 mod.0 version.

The Stoner 63 is more than just a single firearm; it is a modular kit, which contains about 15 sub-assemblies. Different combinations of those sub-assemblies (barrels, feed units, trigger units, sight units) allow the assembly of various firearms on the single receiver unit. All versions had quick-detachable barrels, which was a handy option for a light machine gun. For LMG versions, Stoner 63 system has several styles of barrels, with different lengths and profiles. US Navy's Mark 23 model 0 machine guns used short, fluted barrels, but other versions (with long barrels) also saw combat in Vietnam.
The stamped steel receiver contains an universal bolt group, with a multi-lug rotating bolt and a long stroke gas piston with gas tube. The receiver also has several sets of mounting points for attachment of all other sub-assemblies and the quick-detachable barrel. In rifle and carbine configuration, the receiver is so orientated that the gas system lies above the barrel and the feed unit mounting points are below the receiver. In all machine gun configurations, either belt or magazine fed, the receiver is turned “upside down”, with the gas system being below the barrel, ejection to the left side, and the feed unit above the receiver. In machine gun configuration, the trigger unit has no hammer; instead, its sear interoperates with the cut in the gas piston rod, allowing only full automatic fire, and only from an open bolt. The magazine feed unit can accommodate proprietary curved box magazines for 30 rounds, and can be used both in rifle and machine gun configurations. The belt feed unit could be used only in machine gun configurations. Early weapons had left-side feed, which sometimes caused jams because ejected shells reflected back into ejection window. Late production light machine guns had right-side feed which eliminated this problem. Early belt-fed LMG's were issued with 100-round box or 150-round drum belt containers. Late production LMG's with right-side feed were issued only with 100-round box containers, made from plastic. All containers were clipped to the bottom of receiver. Different rear sight units were available for various configurations, with the front sights being mounted on quick detachable barrels.

On earlier Stoner 63 system weapons, the charging handle was located on the right side of the bolt carrier; the safety and fire selector were combined in one control, located on the left side of the trigger unit. On the modified Stoner 63A system, the charging handle was attached to the gas piston rod, and projected from the top in rifle / carbine configuration, or from the bottom in MG / LMG configurations; the safety was made as separate lever at the front of the trigger guard, with the fire mode selector still located on the side of the trigger unit, above the pistol grip. Standard buttstock and forearm were made from plastic. All Stoner 63 light machine guns were issued with detachable folding bipods; while tripod and even vehicle mountings were developed by Cadillac Gage Corp, it seems that these never were used in combat.

For description and images of Stoner 63 rifles and carbines please follow this link.