EM-2 assault rifle, officially adopted in Britain as Rifle, Automatic, No.9 Mk.1 but never put into service. Note that the backup sights are in raised position. 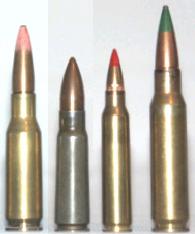 The history of the British EM-2 (Experimental Model-2) assault rifle is interesting and somewhat pitiful story. The EM-2 was born as a result of the experience with small arms, gained during the Second World War. It was obvious that the modern warfare will require the infantry to be armed with light, selective fire weapon with effective range of fire much longer than of submachine gun, but shorter than of conventional semi-automatic or bolt action rifles. This requirement effectively led to the development of the various “intermediate” cartridges. The first power to adopt this concept was the Germany, which issued in limited numbers the selective-fire weapons with intermediate cartridge (7.92×33 mm. Kurz) since 1942. The Soviet Union was the second to this case, developing its own intermediate cartridge in 1943 and began issuing weapons for it on limited basis since 1944 and on large scale since 1949. The Great Britain also felt the need to replace both Sten submachine guns and SMLE No.4 bolt-action rifles with more modern equipment. The research and experience clearly showed that it is entirely possible to replace both of these weapons with single new weapon, with effective range of fire of no more than 1000 yards and with selective-fire capability. This weapon, of cause, required a new cartridge, which was developed after extensive research and development. This cartridge, an “ideal” from British point of view, was of .280 caliber (7 mm.) and had a bottlenecked case 43 mm. long. The pointed bullet weighted 9.08 g (140 grains) and had muzzle velocity of about 745 m/s (2445 fps). The rough comparison of this round against other most common modern cartridges can be found in the table below. Basically, this cartridge offered significant advantage in effective range and penetration against not only 9x19mm Luger pistol cartridge, but also against 7.92×33 mm. Kurz German and 7.62×39 mm. Soviet intermediate cartridges, producing slightly more recoil, which was still significantly less than of .303 British rifle cartridge or latter 7.62x51mm NATO cartridge. This cartridge immediately attracted the attention of the Belgian company Fabrique Nationale, which at the same time worked on the advanced version of their SAFN-49 rifle. Canada also showed significant interest in this cartridge.

Having the “ideal” cartridge on hands, both Britain and Belgium began to develop its own assault rifles. The Belgian part of the story will be covered in the FN FAL article elsewhere on this site, and the British part goes right here. The Royal Small Arms Factory (RSAF) at Enfield Lock began to develop its new assault rifle in the late 1940s. The design team was led by the LTC Edward  Kent-Lemon and Stefan Janson. New prototype rifles were called the EM-1 and EM-2 (Experimental Model 1 and 2) and were of similar layout and dimensions, being different mostly in shape details and controls. Both rifles were of bullpup layout, that means that the magazine and the barrel chamber are located behind the triggerguard and pistol handle. It must be noted that these rifles were not the first ever built in the bullpup layout – I know about al least one bolt action bullpup rifle dated back to post-WW1 period. The EM-2 attracted more attention, being slightly less futuristic in appearance. It was a very well balanced and laid out rifle, with comfortable controls, accurate and reliable. In 1951 the EM-2 rifle was nominally adopted for British service as “Rifle, Automatic, caliber .280, Number 9 Mark 1”. Had it been put into service, the British troops could have a first class assault rifle prior to 1960, but due to the NATO standardization issues Britain followed the USA and adopted the overpowered American 7.62×51 mm. cartridge instead of more promising .280, and EM-2 simply could not be easily rebuilt for this round. So, Brits had to adopt another design, but this is also another story. There’s also some rumors that infamous British SA80 / L85 assault rifle, introduced in 1980s, was based on the EM-2 design. It is not true, since the crappy L85 has nothing in common with EM-2 except for general external “bullpup” layout.

The EM-2 rifle is a gas operated, magazine fed, selective fire rifle. It uses gas system with long piston stroke, located above the barrel. The locking system is generally similar to one found in the WW2-period German Gew.43 or in the Soviet Degtyarov DP-27 machine gun (but turned back to front). Bolt locks into the receiver by two flaps, that are pivoted at their rear to extend out of the bolt and into the locking recesses in the receiver walls. Flaps are controlled by the firing pin sleeve, coaxially located inside the hollow bolt, and the sleeve is in turn connected to the gas piston rod by the projection on the rod. The recoil spring is located at the rear part of the gas piston, above the bolt. When gun is fired, the hot power gases cause the gas piston to go to the rear. This movement first causes the firing pin sleeve to retract within the still stationary bolt, causing the locking flaps to be withdrawn from locking recesses and into the bolt. As soon as the bolt is unlocked, it begin to move back against the pressure of the return spring, ejecting the spent case and feeding the fresh round into the chamber on its return into the battery. EM-2 fires from closed bolt all the time. The firing mechanism is striker-fired, with the main spring and the sear located in the bolt. The sear is located at the bottom of the bolt and is operated by the long trigger lever, connected to the trigger. In general, this was somewhat complicated but very dust-proof, reliable and neat design.

The cocking handle is located at the right side of the weapon, on the front part of the gas piston rod, and can be removed when gun is disassembled. The safety switch is located at the front of the triggerguard and is similar in operation to one found in M1 Garand or M14 rifles, and the fire selector is of cross-bolt push-button type, and located above the pistol handle. All controls are easily reachable with firing hand. The furniture (pistol handle and forend) is made from wood, the buttplate is attached to the receiver directly and can be easily removed for field-stripping. EM-2 was fitted with optical sights, mounted on the integral carrying handle as standard. Optical sights were non-adjustable, and range adjustment capability was built into the aiming reticle picture. The emergency (backup) iron sights were also fitted – rear folding peep-hole (diopter) sight was attached to the left side of the carrying handle, and the folding front post sight was mounted on the left side of the gas block.