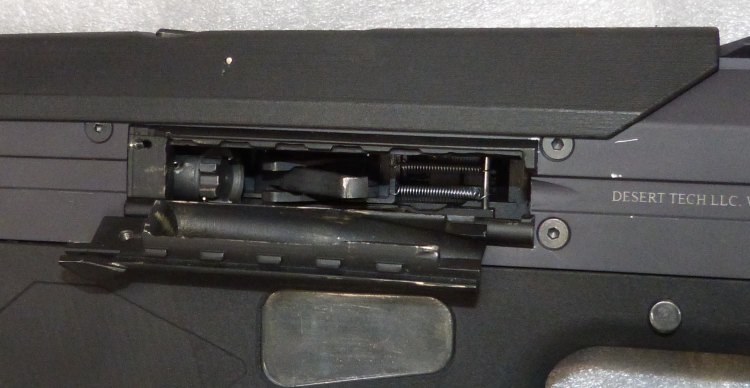 Desert Tech MDR rifle, close-up view to ejection port with cover opened down to show the bolt (held back by bolt hold-open device; seen on the left) and the ejection lever in its operating position (in the middle)

The Desert Tech MDR rifle is a product of the US-based company Desert Tech LLC (Deserttech, former Desert Tactical Arms). MDR rifle was first displayed to the public at ShotShow-2014, and entered production in 2017. Originally intended to arm various Special Operations elements of Law Enforcement and Military forces, it was later restricted to Civilian use only. As such, production MDR rifles are semi-automati conly, and are used for hunting, target and recreational shooting, as well as for home defense. A slightly improved MDRX rifle is manufactured by the Desert Tech since 2019.

Desert Tech MDR rifle is a modular, multi-caliber semi-automatic weapon with compact bullpup layout. It is built around the powerful 7.62×51 NATO (.308 Win) ammunition, and can be easily adapted to a number of smaller and less powerful rounds with replacement of the barrel and bolt head, and installation of the magazine well adapter. Barrel lengths and calibers can be changed by the end user within minutes with minimum amount of tools. It can be configured into two basic versions, MDR (standard) and MDR-C (compact).

Desert Tech MDR rifle is gas operated, with conventional rotary bolt with seven radial lugs that lock into the barrel extension. Gas system features gas piston, located above the barrel, and a manual gas regulator.
MDR rifle is designed to be completely ambidextrous. Most interesting feature of MDR is its ejection system. Ejection window is made in the right side of the receiver, and ejector is made in the form of a swinging lever, attached to the left inner wall of receiver.  Once the spent cartridge case is fully extracted from the chamber, the ejector lever kicks it from the left, pushing the case to the right and out of the ejection window. The window is provided with cover, which has a forward-pointing ejection tunnel. When ejection port cover is closed, ejector lever pushes the spent case against the inner wall of the ejection tunnel, and forward-moving bolt then pushes the case through the tunnel and out of the gun. This results in spent cases flying forward and to the right, well clear of the face of the left-hand shooting operator. In case of any trouble, the ejection port cover can be opened (swung down) in a second, resulting in a conventional side ejection pattern and providing means to quickly clear jams or examine chamber without any disassembly. Charging handle can be installed by the user on either side of the gun, and three-position safety / selector levers are provided on both sides of the pistol grip. Magazine release buttons are located in front of the trigger guard, roughly on the same place as on any M16 / Ar15 style rifles. Pushing the button releases the magazine catch and allows the magazine to drop free. Combined with bolt hold-open device, this feature is intended to speed up reloads.
Outer shell of the gun is made from impact-resistant polymer, and MDR rifle is available with two user-changeable forend configurations – standard and compact (MDR-C). Sighting equipment can be installed according to user preferences or upcoming mission profile on the integrated top Picatinny rail.  There is also a patent pending sighting system that will include a front sight attached to the barrel.  This front sight will be adjustable for windage and elevation.  With this system each barrel will keep its zero so there is no need to re-zero the iron sights when a caliber is changed.