The original AR-10 of the late 1950s. Note the three-prong flash hider and a bayonet lug under the barrel

The AR-10B rifle, a modern "civilian" re-creation of the AR-10. Notethe lack of the bayonet lug and the M16A2-type rear sight and pistol grip

AR-10A2 is, basically, an upscaled AR-15A2 rifle, chambered for the .308Winchester (7.62x51mm) cartridge. Note that the charging handle is above thebuttstock, as on AR-15 / M16 rifles. The furniture is similar to the M16A2 rifle,except for the muzzle brake

AR-10(T) – a target grade version of the "new" AR-10, with Picatinny-type rail instead of the carrying handle, and the match barrel 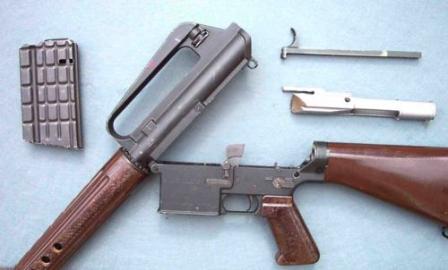 The original AR-10, partially field-stripped. The similarity to the latter AR-15/ M16 rifles is obvious

TheAR-10 rifle, designed by the Eugene Stoner at the Armalite division of the Fairchild Engine and Airplane Corp, seen no significant success at the time ithad been introduced, but it still had some historical significance since the AR-10 served as a basis for the further development of the much more successful AR-15/ M16 series rifles. Basically, earliest AR-15 prototypes were no more than a scaled-down AR-10. The AR-10 was intended for the US Army trials for a newbattle rifle, to replace the venerable M1 Garand.AR-10, with the first prototype built in 1955, came too late for these trials,and was too unconventional for conservative minds in the US Army, and consequently lost the trials to the T44 rifle, which was adopted in the 1957 as the M14. The AR-10 was ready for mass production by the 1960, but very few were made in USA. A manufacturing license had been sold to the Dutch company Artillerie Inrichtingen. Only Sudan and the Portugal apparently bought some AR-10 rifles for their military, and the production of the AR-10 had been ceased in the early or mid-1960s, with only about 10 000 military AR-10 being ever made.

Some two or three decades later, the reorganized Armalite company brought the modified AR-10 rifle back to civilian and police markets. Unlike the original AR-10, the new AR-10B is a semi-automatic only rifle, and it is available in four basic versions. The AR-10B itself is more or less a copy of the original AR-10, with the similar brown plastic furniture and short buttstock, and with the trigger-like charging handle under the carrying handle. The other three models look more like the scaled up M16A2 derivatives,with the same A2-style furniture, sights, and M16-type charging handles. TheAR-10A2 has all the A2 furniture and options, while the AR-10A4 has the"flat-top" style receiver with the Picatinny rail instead of the carrying handle. The AR-10(T) is a target grade rifle, with match barrel and trigger andA4-type flat-top receiver.

Technically, the AR-10 differs very little from its direct derivative, the AR-15/M16, so for a complete description please refer to the AR-15 / M16 article on this site.