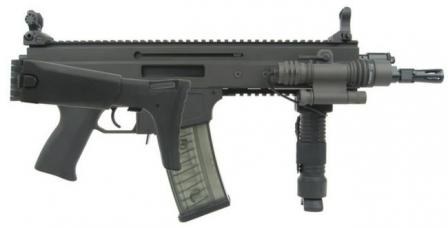 The CZ 805 BREN assault rifle was first introduced to the public in 2009, as a possible replacement for the aged Sa. Vz. 58 assault rifles still in use by Czech armed forces as their standard assault rifle. Early in 2010 the CZ 805 was selected as the new rifle for that role, with a production contract issued to the famous Czech arms factory CZ-UB in the city of Uhersky Brod. CZ 805 rifles are also offered for export, either in military (select-fire) or in civilian (semi-automatic only CZ-805 S1) versions.

The CZ 805 (which is designated as ‘CZ 805 BREN A1’ in Czech sources) is a modular weapon of modern appearance. In its layout it is somewhat similar to the Belgian FN SCAR assault rifle (against which the CZ 805 competed and won in Czech army trials), but the similarity is not exact and there are significant design differences between these two weapon systems.

The CZ 805 assault rifle is of modular, multi-caliber design, with an aluminum alloy upper receiver and polymer lower receiver / fire control unit. The magazine housing is a separate detachable unit, which can be replaced in the field during the course of caliber change. CZ 805 also features quick-change barrels, allowing a change of calibers and barrel lengths according to the mission profile (in each caliber there is a short carbine barrel, standard barrel and long “marksman” or “squad automatic” barrel). The basic action uses a fairly common piston-operated gas action with manual gas regulator, and rotating bolt locking. For each proposed caliber, there is a separate bolt with the appropriate dimensions.

The fire control unit includes an ambidextrous safety / fire selector switch, which permits single shots, 2-round burst and full automatic fire. The charging handle can be installed on either side of the gun, depending on user preferences.
Ammunition feed is from detachable box magazines, which are inserted into a detachable magazine housing. In standard configuration, the CZ 805 will use proprietary 5.56×45 caliber 30-round magazines made of translucent polymer. Other magazine housings allow the use of STANAG or HK G36 5.56mm magazines, as well as various 7.62×39 and 6.8×43 magazines.

The CZ 805 assault rifle is fitted with an integral Picatinny rail on top of the receiver, with additional rails running on the sides of and underneath the forend. The rifle is issued with folding iron sights, and will also accept a wide variety of additional sighting equipment (red-dot or telescope day sights, night sights, IR lasers etc). The rifle is equipped with a side-folding buttstock, which is adjustable for length of pull, and can be completely removed for maximum compactness. Additional equipment also includes the new, specially designed 40mm underbarrel grenade launcher CZ G 805 and a new knife-bayonet.