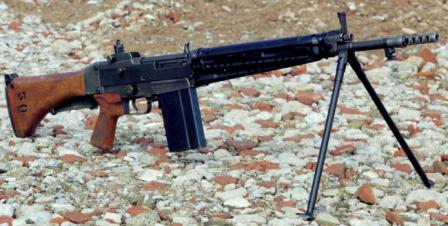 In 1957 the Japan Self-Defense Forces (JSDF) began the search for a new automatic infantry rifle. Being heavily biased to the US in its military trends,Japan probably had no option in ammunition other than the newest US creation, the 7.62×51 NATO cartridge. However, the JSDF felt that it was too powerful, especially for the smaller and lighter Japanese soldiers. Japanese experts accordingly developed a reduced loading,similar in all dimensions to the standard 7.62 mm NATO but with alighter bullet and a smaller powder charge that generated muzzle velocities of about 715 meters per second instead of the 'NATO original' 810 meters per second. The Howa Machinery Co developed the rifle for new cartridge, working closely with the JSDF. In 1964, the 7.62 mm prototype rifle R6E was adopted for JSDF service as the Type 64 rifle. Howa produced it exclusively for the JSDF until about 1988.Since 1990 the Type 64 rifle has been gradually phased out of service in favor of the 5.56 mm Type 89 rifles. Type 64 rifle was never exported from Japan.

The Type 64 rifle is a gas operated, selective fired weapon. The gas and bolt system were most probably inspired either by the Belgian FN FAL or by Soviet Tokarev SVT-40 rifles. The Type 64 has a short-stroke gas piston located above the barrel and fitted with manual gas regulator. The barrel is fitted with a massive muzzle brake. The bolt is locked by tipping its rear end down into recess in the receiver floor. The charging handle is located above the bolt carrier and is readily accessible by either hand. The safety switch / fire mode selector is located on the right side of the receiver, above the trigger guard.
The striker-fired trigger unit isof original design and features a patented fire-rate reducer, which produces a controllable rate of fire of about 450 – 500 shots per minute. Type 64 rifles are fitted with solid wooden buttstocks andhinged steel buttplates, lightweight folding bipods, and muzzle brakes which also serve as rifle grenade launchers. The open sights are mounted on folding posts, and the rear sight has two range settings,for 200 and 400 meters.
The reduced load cartridges and reduced rate of fire arguably make these and the original Spanish CETME guns the only true assault rifles in 7.62×51 caliber, as they are the only ones, which stand any chance of being controllable in fully-automatic fire.