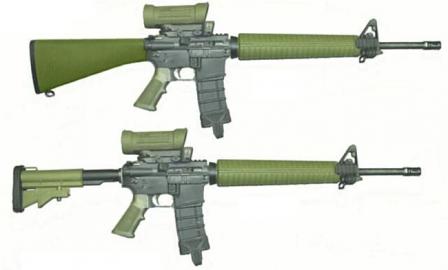 In 1984, Canada adopted a new 5.56 mm assault rifle. To avoid research and design expenses, the Canadians simply purchased the license from USA for a new assault rifle, chambered for the latest 5.56 x 45 NATO ammunition. This was the Colt model 715, also known as the M16A1E1 rifle. Adopted as the C7,this rifle combined features from both earlier M16A1 rifles, such as full automatic fire mode and a two-position flip-up diopter sight, and from the newest M16A2, such as heavy barrel, rifled with faster 1:7 twist, better suited for 5.56mm NATO ammunition. Latter on, Diemaco (now Colt Canada) developed a short-barreled carbine version, fitted with telescoped buttstock, which was designated the C8. While the C7 rifle went to the Canadian armed forces, the C8 is in use with Canadian police forces. According to the recent trends in small arms development, Diemaco also produced so called "flat top"models of both the C7 and C8. These models have a Picatinny-style rail instead of the M16A1-style integral carrying handle with rear sight,and are usually issued with the Elcan optical sights, or with the detachable carrying handle with M16A1-type diopter sights. Designated by the manufacturer as the C7FT and C8FT, in Canadian service these models are issued as C7A1 and C8A1, respectively. Other derivatives are the LSW (Light Support Weapon, basically a heavy barreled C7) and SFW(Special Forces Weapon, a heavy barreled C8). Netherlands adopted the C7 (in both standard and flat top versions) in 1994, and Denmark purchased and adopted the C7FT as the Gevaer M/95 in 1995.
Currently Canadian army is upgrading existing C7 and C7A1 rifles in Canadian service to new C7A2 configuration, which combines the standard C7-type 50cm barrel with C8-type telescoped buttstock, colored furniture,C7A1-type Picatinny rail upper receiver, and additional short Picatinny rails on the sides of front sight block for mounting sighting aids like laser pointers and tactical lights. C7A2 also is fitted with improved sight, Elcan C79A2. Other changes include ambidextrous magazine release and safety/fire selector switch, and other minor improvements
Internally,the C7 differs very little from the original M16A1 rifle, with the mostvisible differences being the heavy M16A2-style barrel and A2-style handguards. Flat top models (C7FT / C7A1) are quite similar in appearance to the M16A3 rifles, and issued with Elcan optical sight along with backup iron sights. The C8/C8FT carbines are quite similar to the US M4/M4A1 carbines.