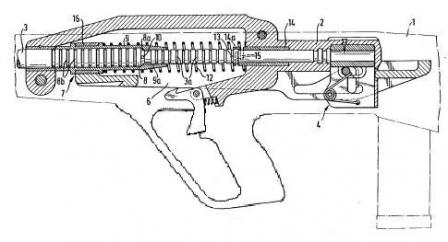 The Advanced Combat Rifle program was started by the US Army in the late 1980s with the main goal to improve the hit probability of average infantry soldier by at least 100 percents above the M16A2 capabilities. During this trials, held in the early 1990s, some new and existing designs from several companies were tested, with more or less sucess, but no one achieved the 100% improvement in hit probablility over the existing M16 rifle, so program was terminated and all participating designs were freezed, which is pity. One of the most interesting participants was a design of the austrian company Steyr-Mannlicher AG.

The Steyr ACR was built as an attempt to revive the fleschette ammunition concept, first tried in the 1960s during US Army SPIW program. In 1960s, the fleschette concept was a failure. In 1990s, it was much more sucessful, but not enough to be worth of total rearming to the new infantry weapon system.

Steyr ACR is built around a specially designed cartridge of nominal caliber of 5.56 mm. This cartridge has simple, cylindrically shaped plastic case. The fleschette, or dart, is totally enclosed in the case. Fleschette diameter is about 1.5 mm (.06 inch), lenght is about 41 mm (1.6 inch), weight 0.66 gramm (10 grains). Fleschette is partially enclosed into discarding sabot, and leaves the muzzle at impressive velocity of 1450 meters per second (4750 fps), still retaining velocity of 910 m/s (2980 fps) at the range of 600 meters. The plastic case had no rim or extracting groove, and priming compound is located annually at the inside wall of the case.

To fire such uncommon cartridge, Steyr ACR has equally uncommon design. Barrel of nominal caliber of 5.56 mm, has a very slow rifling to give initial stabilisation to the fleschette, which is stabilised in flight by its own small fins. Instead of common linear-moving bolt, Steyr ACR have separate chamber (breech block), which can be moved up and down. The whole action is powered by gas drive, which has annual gas piston, located around the barrel. To understand this system i will explain how it works: at first, lets suppose that chamber is empty and rifle is manually cocked for the first shot. In this position the chamber block is its lowest position, aligned with the topmost round in magazine. The gas piston with its operating rod is in its rearmost position and under the pressure of the return spring. When trigger is pressed, the operating rod with gas piston are released and started forward under the pressure of the return spring, which is located around the barrel. This movement, at first, via special rammer, feeds the first round forward from magazine and into the chamber, and then, via shaped cam and breech block spring, rises the breech block with the cartridge into the topmost position. In this position the fixed firing pin passes through the hole in the top of the chamber and penetrates the cartridge wall, igniting the primer composition and firing the round. When projectile (fleschette with sabot) passes the gas port, some of powder gases began to move the gas piston back. This movement, via the operating rod and shaped cam, loweres the breech block with empty case out of alignment with barrel and down to the magazine. When breech comes to stop in the lowest position, a separate rammer feeds next cartridge forward and out of magazine, chambering it. At the same time, the fired case is pushed forward out of the chamber by the next cartridge, and when cleared from the chamber, the spent case simply falls down out of the rifle via the ejection port. The ejection port is located at the bottom of the rifle, ahead of magazine, and this eliminates one of the biggest problems of any bull-pup rifle – a non-ambidextrous (or, in this case – fully ambidextrous) ejection.

If rifle is set to the full auto mode, the firing cycle is repeated as descibed above. Otherwise, the loaded breech remains in its lowest position, awaiting for the next trigger pull.

This quite comprehensive action was concealed in sleek and comfortable polymer case with AUG-styled pistol grip and large ventilated upper rib with fixed sights. Optical sights also were fitted. Due to extremely high projectile velocity, flight time was very short at any practical ranges, and trajectory was wery flat, giving the shooter almost ray-gun performance, which allowed to fire withouth prior calculations of point of impact – speaking simply, at any practical combat ranges shooter will hit where it aimed, regardless target movements (projectile flight time to the target at 300 meters is about 0.2 seconds). Due to high velocity, Steyr ACR had good killing power and armour piercing capablities, and due to the low weight of the projectile recoil was low. But it was not enough to double the M16 performance, so, for now, the Steyr ACR remains in prototype or preproductional state and the program is freezed if not abandoned at all.