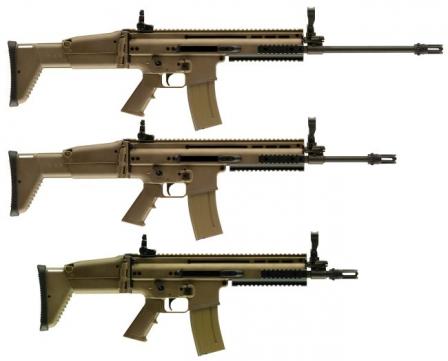 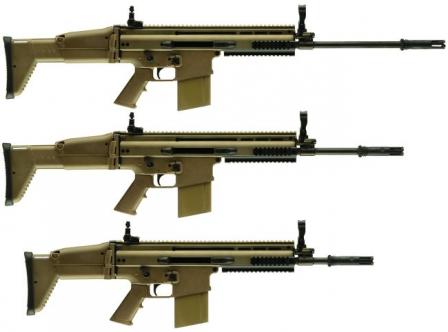 The US Special Operations Command(US SOCOM) issued a solicitation for the procurement of SOF CombatAssault Rifles (SCAR)on October 15th, 2003. This solicitation requested a new combat rifle,specially tailored for the current and proposed future needs of the US Special Forces,which are somewhat different from latest generic US Army requirements,which are being fulfilled by the newest Heckler-KochXM8 assault rifle. The key difference in basic requirements between XM8 and SCAR is that, while XM8 is a single-caliber weapon system, tailored for 5.56x45mm NATO ammunition, the SCAR should be available in various different calibers.Initial SOF requirements included two basic versions of SCAR system – the SCAR Light (SCAR-L), available in 5.56mm NATO, and the SCAR Heavy (SCAR-H), which should be initially available in significantly more powerful 7.62×51 NATO chambering, and should be easily adaptable in the field to other chamberings. These other chamberings initially include the well-spread 7.62×39 M43 ammunition of the Soviet / Russian origins, and probably some others (like the proposed 6.8×43 Remington SPC cartridge, especially developed for US Special Forces).The keyidea of SCAR rifle system is that it will provide the Special Forces operators with wide variety of options, from short-barreled 5.56mm SCAR-L CQC variation,tailored for urban close combat, and up to long range 7.62×51 SCAR-HSnipervariant, as well as 7.62×39 SCAR-H, which will accept "battlefield pickup" AK-47/AKM magazines with 7.62 M43 ammunition, available during the operations behind the enemy lines. Both SCAR-L and SCAR-H shall be initially available in three versions, Standard(S), Close Quarters Combat (CQC) and Sniper Variant(SV; now it is dubbed Long Barrel – LB). All these variants, regardless the caliber and exact configuration, will provide the operator with the same controls layout, same handling and maintenance procedures, and same optional equipment, such as sights,scopes, and other current and future attachments.

As it turned out, FNSCAR rifles are not based on any previous weapons but designed from the scratch. In all variants FN SCAR rifles feature gas operated, short stroke piston action with rotating bolt locking. Bolt system appears to be somewhat similar to that of FNMinimi / M249 SAW machine gun. This system apparently is less sensitive to fine sand, dust and any other fouling inside the receiver, than any system with M16-type multi-lug bolt and plunger-type ejector.
Receiver is made from two parts, upper and lower, connected with two cross-pins. Upper part is made from extruded aluminium, lower part is made from polymer. SCAR-L and SCAR-H use similar upper receivers that differ only in the size of ejection port. Other different parts include caliber-specific bolt, barrel, and lower receiver with integral magazine housing. Parts commonality between SCAR-L and SCAR-H is astonishing 90%. Barrels are quick-detachable, and held in the upper receiver with two cross-bolts. Barrel change procedure requires minimum amount of tools, takes just several minutes and there is no need to adjust the headspace after the change.
The trigger unit with ambidextrous safety-fire mode selectors witch allows for single shots and full automatic fire, with no provisions for limited-length bursts mode. The charging handle could be easily installed on either side of the weapon, so the upper receiver has respective cuts on both sides. Top of the upper receiver is covered by the full-length integral Picatinny rail (MIL-STD 1913); additional Picatinny rails are mounted on both sides and under the free-floating handguards. Side-folding polymer buttstock is adjustable for length of pull, and is shaped to provide positive cheekrest with adjustable cheek support. SCAR rifles are fitted with removable, adjustable iron sights, with folding diopter-type rear sight on the receiver rail, and folding frontsight onthe gas block. Any additional type of sighting equipment, necessary for current tasks, including telescope and night sights, can be installed using MIL-STD 1913 compatible mounts.
Mk.16 SCAR-L rifle will use improved M16-type magazines, made of steel; Mk.17 SCAR-H will use proprietary 20-round magazines in 7.62×51 NATO chambering, or standard AK-type magazines in proposed 7.62×39 M43 chambering. Current prototypes of SCAR rifles do not have bayonet mounts,and, probably, will never have one.

Special thanks to Charles Cutshawfor invaluable information and images