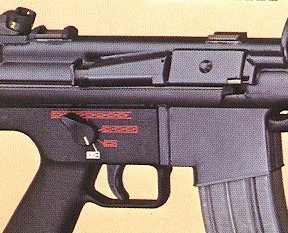 The G41 Assault Rifle was developed by Heckler & Koch in the early 1980’s. It was based on the previous HK 33E Assault Rifle from the same company. Initially, it was intended to be a companion weapon to the G11. While the innovative caseless G11 was to be issued to front line troops, the G41 was to be issued to the second line troops. When the G11 program collapsed because of financial and political reasons in the early 1990’s, the G41 was offered to many customers but was found to be unsaleable. A weapon of extremely high quality, but also too expensive.

Essentially, the G41 is a further evolution of the early G3 Rifle, having the same roller delayed blowback action, only chambered for 5.56 mm NATO ammunition. The G41 also featured the 0-1-3-30 trigger group, STANAG compatible magazines and scope mountings; a silent bolt closure device (similar to the “forward assist device” on the M16A1 and M16A2), integral dust cover on the ejection port, and integral side-folding carrying handle. The G41 could be issued with a fixed plastic butt or with a telescoping (folding) butt.

Heckler & Koch has ceased production of the G41, but Italian company Luigi Franchi has since bought the licensing rights.