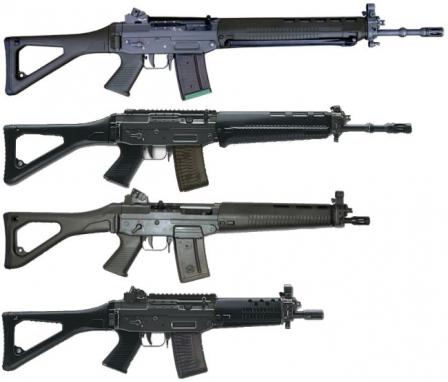 The SIG 550 series of assault rifles came about in the late 1970’s. At that time the Swiss Army began to search for a new, smaller caliber rifle, in order to replace the old, full-power 7.5mm Stgw.57 (SIG510) automatic rifle.

Initial tests were done with the 5.6 x48 Eiger and 6.5 x 48 GP80 ammunition. Prototype rifles were developed by SIG (based on their SG-540 design) and by their competitors at the time, state-owned Waffenfabrik Bern (W+F). The Swiss Army also selected a slightly improved version of the 5.56 x 45 NATO cartridge and designated it as the 5.6 mm GP90.

Further testing proved the superiority of the SIG SG-541 rifle over its W+F rival. In 1983, the Swiss Army officially adopted the SIG SG-541 as the Sturmgewehr-90, or Stgw.90. Due to financial constraints production only began in 1986. Currently, the Stgw.90 is the standard rifle of the Swiss armed services.

The Swiss Army took its last deliveries of the Stgw.90 in the mid-1990’s, but these rifles are still offered for export by the international SIG SAUER company, (until 2007 known as “SIGARMS”). They are also available in the civilian market in semi-automatic only versions. In export form this rifle is known as the SIG SG-550.

“Carbine” and subcompact “Commando” assault rifle versions are available in the form of SIG SG-551 and SIG SG-552, respectively. Civilian versions of the SIG SG-550 and 551 are known as the Stgw.90 PE in Switzerland or SIG 550-SP and 551-SP when sold for export. The SIG-550 is often referred to as the finest 5.56 mm rifle ever made. It is also, not surprisingly, quite expensive.

Recently, SIG SAUER has introduced a civilian/ law-enforcement offspring of the SG-550, known as SIG 556. This is a semi-automatic rifle, altered to accept M16-type magazines and fitted with “Americanized” furniture. There is also the SIG 556xi “Russian” modular rifle built to accept most AK magazines (both metal and polymer) and firing 7.62x39mm M43 ‘Soviet’ ammunition. With this rifle an operator is able to pick up magazines from AK style rifles in the field and run them. The barrel and lower can be changed out to accept any AR style lower, firing  5.56x45mm NATO and obviously accepting M16 style magazines. There are also 3 options for barrel length, 10″, 14.5″ and 16″ (254, 368 and 406mm respectively).

The most compact weapon in the line, the SIG SG-552, is similar to SIG SG-551 but it has an even shorter hand guard and barrel. Due to the short barrel and gas piston, SG-552 has the return spring relocated to the rear part of the receiver, and thus it has an altered bolt carrier and upper receiver. The gas port has a gas regulator with two different positions, open and closed ( the latter for firing rifle grenades). The receiver of all of the SG-55x series guns is made from stamped steel and has two major parts, upper and lower. These are connected by push pins. The barrel is screwed into the upper receiver. The trigger unit has a safety/fire selector switch on the left side of the receiver, with 3 settings: safe, semi-auto, full-auto.

If desired, an additional module could be installed in the trigger mechanism to allow 3-round burst mode. Rear sights are drum-type (like those found on Heckler & Koch rifles). On certain current production models the rear sight is replaced with a full-length Picatinny style rail with folding back-up rear sight. SIG SG-550 has a muzzle compensator/flash hider of NATO-standard diameter, so it is possible to launch rifle grenades from the muzzle.

The SIG-550 can be fitted with detachable folding bipods under the handguard, and is issued with a side-folding, skeletonized polymer buttstock with adjustable cheek rest. Every rifle of the SIG SG-550 family can be fitted with a proprietary, quick detachable scope mount, although current production rifles are usually fitted with one or more picatinny rails.

The Swiss Stgw.90 are often seen with a 4X fixed power scope, export versions can be equipped with commercial telescope sights, ACOG or ‘red dot’ sights, depending on the customer’s preference. SIG SG-550 can also  be fitted with a bayonet. Standard magazine capacity for the Swiss military Stgw.90 rifles is 20 rounds, as Swiss tactical doctrine calls for accurate semi-automatic fire, reserving full automatic mode only for emergency purposes. Standard magazines can be clamped together for ease of carrying, using integral studs on the magazine walls. For those who might require more firepower, SIG also produces 30-round magazines.

The carbine version of the SIG-550 is called SG-551 and has a shorter barrel which is adapted better for carriage in vehicles and use in urban environments. Quite recently, SIG also introduced a “long barrel” version of the SG-551, which is known as SIG SG-551 LB. SIG-551 is not equipped to fire rifle grenades.