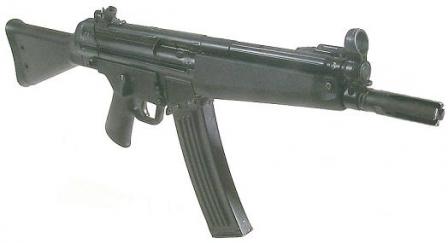 HK 53A3 with retractable buttstock

The HK 33 was developed by the German company Heckler & Koch during the mid 1960’s. It’s a scaled down version of the HK G3 Battle Rifle, and entered production in 1968.

The HK 33 was developed as an adaptation to the then new cartridge, 5.56x45mm (.223 Remington). While it was not immediately adopted by the German Military, it saw significant use by some West Germany police and security units. It was also widely exported, and taken up by Malaysian, Chilean and Thai Armed Forces.

The HK 53 is an ultra compact version of the HK 33. Heckler & Koch advertised it as a “submachine gun” and, according to common sense, it falls into the same category as the soviet AKS-74U or American Colt “Commando”. All of these guns can be classified as “compact” or “short” assault rifles because they fire an intermediate rifle round as well as being compact. Hk 53 was developed in the mid 1970’s and is still in production and offered for export.

HK 33 is a delayed blowback operated, selective fire rifle, that utilizes a two piece bolt. Two rollers attach to the bolt, and they function to delay the blowback. This is the method of delaying blowback originally invented by Ludwig Vorgrimmler and used first in the design of the StG 45(M). It was later licensed to CETME in Spain and became the basis of the system for the HK G3.

All HK 33 variants are available with alternative trigger units, that is, with or without 3-round burst mode. Heckler & Koch’s proprietary claw-type mounts allow telescopic sights to be mounted on any version of the HK 33. Full length versions of this weapon can be equipped with a bayonet or under barrel 40 mm grenade launchers. Specifically, the HK79A1, also made by Heckler & Koch. Full length HK 33 rifles also can launch rifle grenades from the combination muzzle compensator / flash hider. All HK 33 and HK 53 guns are equipped with drum-type rear sights.

The HK 53 is internally similar to the HK 33 but cannot fire rifle grenades nor mount an under barrel 40mm grenade launcher. HK 53 cannot be equipped with a bayonet, and features a long, four-pronged flash hider.