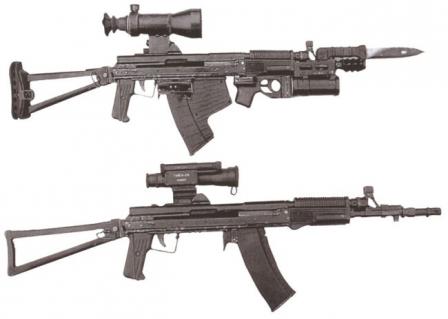 One of ASM-DT assault rifle prototypes, with underwater magazine andadditional equipment (above) and with standard "above water" magazine(below)

In mid-1970s, Soviet Navy adopted an underwater APS assault rifle for its combat divers, to provide underwater security against enemy frogmen and specially trained sea animals (i.e. dolphins). The APS, while successful in its narrow niche, had its set of inherent flaws, so, during the late 1990s,a severely modified version of it appeared in Tula, in the form of the experimental ASM-DT “dual medium” amphibious assault rifle.
The key improvement of the ASM-DT is that it uses a 5.45 mm rifled barrel with relatively shallow rifling, which allows to fire both standard 5.45 x 39 spin-stabilized ammunition, and modified underwater hydrodynamically stabilized ammunition, which is also based on 5.45 x39 case, with long projectile of about 5.4 mm in diameter. To achievethis, the magazine housing of the ASM-DT is fitted with a sliding magazine catch, which can be positioned at the rear of the long magazine port to hold the deep underwater magazines, or in the middle of the magazine port to hold the relatively shallow (front to back)AK-74 magazines. In the latter mode, the rear, unused part of the magazine housing is closed by a spring-loaded dust cover. To avoid problems with the remaining water in the barrel when firing the 5.45 x39 in air, the chamber has special grooves that lead from the chamber forcing cone forward, into the rifling grooves. When the standard 5.45mm cartridge is fired, a small amount of powder gases run through the grooves ahead of the bullet, effectively blowing the remaining waterout of the barrel. The rest of the action is similar to the APS, butthe muzzle is fitted with AKS-74U-style muzzle device / flash hider.The overall performance of ASM-DT with underwater ammunition is similar to the APS, while in air and with standard 5.45 x 39 ammunition, it is roughly on par with the AKS-74U and greatly out performs the APS.