The drawing of the Steyr AUG prototype (circa 1974) from original patent.
Note the open sights instead of the latter built-in telescope sights 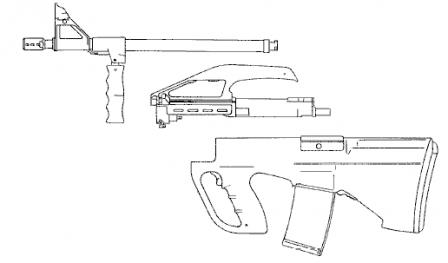 Steyr AUG A3 Carbine with 16inch barrel and special 40 mm grenade launcher;grenade launcher sight is attached to the top of removable telescopic riflesight 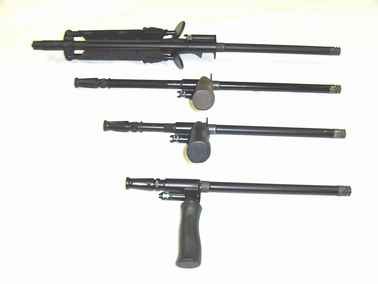 The Steyr AUG (Armee Universal Gewehr – Universal Army Rifle) had been indevelopment since the late 1960s, as a replacement for venerable but obsolete Stg.58 (FN FAL) battle rifles for Austrian army. It was developed by the Austrian Steyr-Daimler-Puch company (now the Steyr-Mannlicher AG & Co KG) in close conjunction with Austrian Army. The major design is attributed to the three men – Horst Wesp, Karl Wagner and Karl Möser, who developed most of the rifle features. From the Austrian Office of Military Technology the project was supervised by the Colonel Walter Stoll. The new rifle has been adopted by the Austrian Army in 1977, as the Stg.77 (Assault rifle, model of 1977), and production began in 1978. Since then, the AUG gained serious popularity, being adopted by the armed forces of Australia, Austria, New Zealand, Oman, Malaysia, Saudi Arabia, Ireland and some others. It also was widely purchased by various security and law enforcement agencies worldwide, including the US Coastal Guard. The Steyr AUG can be considered as the most commercially successful bullpup assault rifle to date. Since the 1997, the Steyr-Mannlicher produced an updated version of the AUG, the AUG A2.
In around 2005, Steyr-Mannlicher introduced the most recent version of AUG, the AUG A3. This version is characterized by addition of four Picatinny-type accessory rails – one at the top of the receiver, and three around the barrel, in front of the receiver – at both sides and below it. Therefore there AUG A3 has no standard / integral sighting equipment; instead, any open, telescope or night vision sights can be installed on the upper rail, using appropriate mountings. Lower rail can be used to mount various attachments like tactical front grips, flash-lights, and a specially designed 40mm grenade launcher. Side rails can be used for equipment like laser-aiming devices.

Some said that the AUG rifle was revolutionary in many respects when it first appeared, but this is not true. In fact, the AUG is a clever combination of the various previously known ideas, assembled into one sound, reliable and aesthetically attractive package. Let’s look at this a little closer. Bullpup configuration: the Steyr AUG is not a first military bullpup ever devised. In fact, British Enfield EM-2 and Soviet Korobov TKB-408 bullpup assault rifles precede the AUG by some 25-30 years. The French  FAMAS bullpup also appeared on the scene at the very same time, as the AUG did. Plasticfirearm housing: another Soviet experimental bullpup design, Korobov TKB-022, had the plastic housing as early as in 1962, and the  FAMAS rifle, again, has this same feature at the same time as AUG did. Telescope sight as a standard: the British  EM-2 bullpup rifle of late 1940s, as well as the experimental Canadian FN FAL prototypes of early 1950s, also featured a low-magnification telescope sights as their prime sighting equipment. A modular design: first systems, consisting of various firearms based on the same receiver and action (automatic rifle, light machine gun, carbine) were originally developed in 1920s in France by Rossignol and in Soviet Russia by Fedorov. Considering all said above, one must agree that the AUG was a logical development of various well known ideas, and a really successful one.

In general, the AUG is known for good ergonomics,decent accuracy and a good reliability.

AUG is built around the aluminium casting receiver, with steel reinforcement inserts. One such insert is used to provide the locking to the removable barrels and the rotating bolt, thus relieving the receiver from most of the firing stress. Other inserts are used as a bearings for the bolt carrier guide rods.

The AUG uses a short piston stroke, gas operated action, with the gas piston mounted inside the compact gas block, which is fixed to the barrel. The gas cylinder is offset to the right from the barrel. Gas piston has its own return spring, contained inside the gas block. The gas system features a three positions gas regulator, which allows for two open positions (for normal and fouled conditions) and one closed position (for launching the rifle grenades). The gas block also contains a barrel fix / release lock and a front grip hinge. Each barrel has eight lugs, that lock into the steel insert in the receiver, and there’s four basic barrel patterns for the AUG: standard rifle barrel is 508 mm (~20 in) long. “Compact” or “Submachine gun” barrel is 350 mm (13.8 in) long, “Carbine” barrel is 407 mm (16 in) long, and the heavy / LMG (light machine gun) barrel is 621 mm (24.4 in) long. On each rifle barrels can be exchanged in the matter of seconds. Each barrel is fitted with the flash hider, and the heavy 621 mm barrel also is fitted with lightweight folding bipods. There’s no bayonet lug on Austrian service rifles, but it can be installed if required.

Barrel replacement procedure, as noted above, takes only few seconds (assuming that the shooter has the spare barrel handy). To remove the barrel, one must take off the magazine, and clear the rifle by operating the cocking handle. Then, grasp the barrel by the front grip, push the barrel retaining button at the gas block, and rotate the barrel and pull it out of the rifle. To install a new barrel, simply push the barrel down into the front of the receiver all the way and then rotate it until it locks. The rifle now is ready to be loaded and fired.

The bolt system consists of the bolt carrier, which has two large hollow guide rods, attached to its forward part. The left rod also serves as a link to the charging handle, and the right rod serves as the action rod, which transmits the impulse from the gas piston to the bolt carrier. The rotating bolt has 7 locking lugs, claw extractor and a plunger-type spring loaded ejector. Standard bolt has its extractor on the right side, to facilitate right-side ejection, but the left-side bolts (with mirrored positions of extractor and ejector) are available for those who need left-side ejection. The two return springs are located behind the bolt carrier, around the two string guide rods, that are located inside the bolt carrier guide rods. The cocking handle is located at the left side of the gun and normally does not reciprocate when gun is fired, but it can be solidly engaged to the bolt group if required by depressing the small button on the charging handle. On the latest AUG A2 variant, the charging handle was made folding up and of slightly different shape. The AUG action features a bolt stop device, that holds the bolt group open after the last round of ammunition from the magazine is fired. To release the bolt after the magazine replacement, one must pull the charging handle.

The hammer unit is made as a separate assembly and almost entirely of plastic (including the hammer itself). Only springs and pins are steel. The hammer unit is located in the butt and is linked to the sliding trigger by the dual trigger bars. The safety is of the cross-bolt, push-button type and located above the pistol grip. There’s no separate fire mode selector on the AUG rifles. Instead, the trigger itself is used to control the mode of fire. Pulling it half the way back will produce single shots, while the full pull will produce automatic fire. The enlarged triggerguard encloses the whole hand and allows the gun to be fired in winter gloves or mittens.

The standard sighting equipment of the Steyr AUG rifle is the 1.5X telescope sight, with aiming reticle made as a circle. This circle is so dimensioned so its visible inner diameter is equal to the visible height of the standing man at 300 meters range. The adjustment knobs on the sight are used only for zeroing. The sight housing, which is integral to the receiver on the AUG A1 models, also features an emergency backup iron sights at the top of the telescope sight housing. Some early production AUG rifles of A1 pattern were fitted with receivers that had an integral scope mounts. On the AUG A2 models, the standard scope mount can be quickly removed and replaced by the Picatinny-type mounting rail.

The housing of the AUG rifles, integral with the pistol handle and triggerguard, is made from the high impact-resistant polymer, and is usually of green (military) or black (police) colour. The housing has two symmetrical ejection ports, one of which is always covered by the plastic cover. The rubber-coated buttplate is detachable and, when removed, opens the access to the rifle internals, including the hammer unit and the bolt group. The buttplate is held in position by the cross-pin, which also serves a s a rear sling swivel attachment point.

The AUG is fed from the detachable box magazines, that hold 30 (standard rifle) or 42 (light machine gun) rounds. The magazines are made from semi-translucent, strong polymer. The magazine release button is located behind the magazine port and is completely ambidextrous (some said that it is equally NOT comfortable for either hand use).