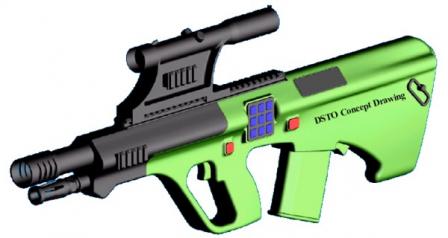 2001 concept of the AICW system 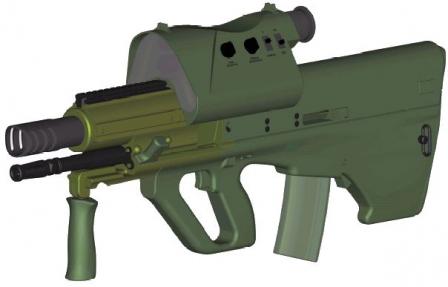 2003 concept of the AICW system 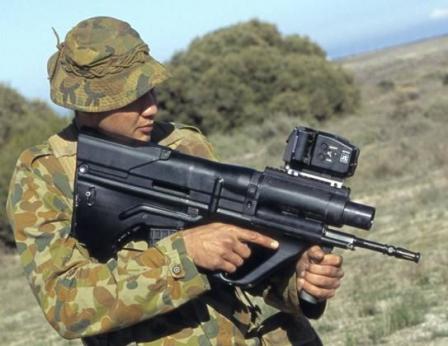 The AICW (Advanced Infantry Combat Weapon) is a joint development of the Australian DSTO (Government operated Defence Science and Technology Organisation), and private companies Metal Storm and Tenix Defence. This development has been carried out since the turn of 21st century, closely following the concept of the American XM29 OICW system. Overall, AICW represents the modular weapon system that combines the 5.56 mm. rifle/carbine copmponent as a host (basic) platform with 40 mm. multi-shot grenade launcher (G/L) module and multi-purpose electro-optical sighting system, which can be used to fire either rifle or G/L component, and also can provide recon data to external “consumers” such as tactical computers.
The host rifle component of the AICW is the updated Australian-made F88 rifle, which is a license-built Steyr AUG. However, the basic F88 rifle has been extensively modified to accept other elements of the system – for example, receiver has been upgraded to receive the G/L module at the top, and the buttstock has been enlarged to accomodate G/L electronic fire contol module. Other changes include modification to the safety and trigger arrangements – AICW system has a single trigger for both weapon components (5.56 and 40 mm.), and a three position (safe – rifle – G/L) safety/selector switch at the side of the pistol grip.
The most interesting part of the AICW weapon is the multi-shot Metal Storm 40 mm grenade launcher, which looks like a single 40 mm. G/L barrel but contains three 40 mm. projectiles stacked one behind the another. These projectiles are launched using the electric ignition impulses, provided by the fire control module built into the buttstock of the host rifle. Since the muzzle velocity of these projectiles is slightly more than usual for 40mm handheld G/L (95 m/s instead of 75 m/s), host rifle incorporates the recoil reduction buffer, that allows the Metal Storm G/L barrel to recoil against the spring, decreasing the peak recoil impulse.
The top of the receiver hosts the multi-role sights of various type and make. At the AICW VX3 live fire demonstartions that took place in the summer of 2005, AICW prototypes were displayed with ITL Viper multi-purpose rifle sight (that incorporates laser range-finder and digital compas), or with Vinghog Vingsight Fire Control System. At the present time (late 2005) AICW prototypes have not yet fired 40 mm. grenades with live warheads, nor incorporated an airburst facility. However, it is stated that it is possible to easily adapt most of the existing 40mm grenade warheads to the Metal Storm technology, including air-bursting grenades that are now in development in several countries.

At the present time AICW weapons are available only as the “3rd generation technology demonstartors”, that completed first live-fire trials (as a complete system) in the summer of 2005. Current Australian MOD plans state that ADF may start to purchase AICW systems in around 2010-2012.