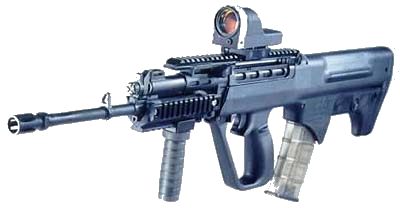 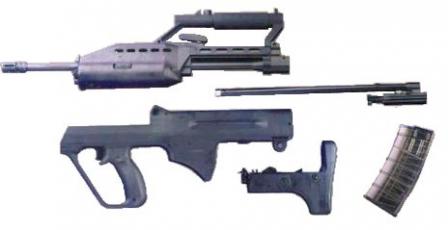 The SAR-21 is the latest development of the Singapore's Chartered Industries company, now known as the Singapore Technologies Kinetics division. This rifle was first displayed on public in 1999, at the DSEi '99 defense exhibition. At the present time the SAR-21 is adopted by the Singapore Armed Forces as the standard assault rifle, and gradually replaces the ageing M16S1 (Singapore-made M16A1 rifle), and CIS previous SAR-80 and SR-88 rifles. It is also offered for export military and law enforcement sales. At the present time it's hard to judge this rifle, but the available reports are quitefavorable, stating that the gun is comfortable to carry and fire, accurate,reliable and has low recoil. While SAR-21 is much shorter than the M16 rifle with the barrel of the same length, the SAR-21 has the disadvantage of the right-side only extraction, with no provisions to change it to the left side(unlike most other modern bullpup rifles, like the SteyrAUG, GIAT FAMAS or the IMITavor).

Technical description.
The SAR-21 represents some kind of mainstream in the turn-of-the-centuries small arms technology. It is of bullpup layout, and utilizes the most conventional gas operated, rotating bolt locked action, with detachable box magazine feeding.

The gas system of the SAR-21 is located above the barrel. The long stroke piston is rigidly attached to the bolt carrier. Rotating bolt has 2 lugs and locks into the barrel extension. The return springis partially housed inside the hollow gas piston rod and behind it. The charging handle is located above the gun housing, under the scope / carrying handle unit,and folds forward when not in use. The charging handle does not reciprocate when gun is fired. On the SAR-21 P (Picatinny rail) and SAR-21 RIS (Rail Interface System) versions of the basic design the charging handle is moved to the left side of the gun, leaving the place at the top for the sights / accessory rail.

The housing of the SAR-21 is made from tough, high impact resistant polymer, and consists of barrel section with the barrel / gas system, forearm and sights,upper receiver with the pistol grip and magazine housing, and the lower receiver with the buttplate and the hammer unit inside. All major parts are held together by the push-pins and can be separated for disassembly without any special tools.The upper receiver also incorporates a special safety system, which protects the shooters' face in the event of the cartridge case rupture or explosion.

The safety switch is located at the front of the enlarged triggerguard and is of the cross-bolt, push-button type. SAR-21 can provide 2 modes of fire, single shots and full automatic fire.

The SAR-21 is fed using proprietary 30-rounds box magazines, made from the translucent plastic.

The standard sighting equipment includes an integral 1.5X magnification telescope sight, with the emergency backup open sights formed at the top of the telescope housing. The SAR-21 P and SAR-21 RIS have no integral sights, instead these rifles featured a NATO-standard Picatinny type scope rail at the top of the gun, that can be fitted with wide variety of day and night sighting devices. Another interesting feature of SAR-21is that it incorporates a laser aiming module (LAM, also sometimes referred as a laser pointer) as a standard feature. The LAM is mounted below the barrel, inside the forearm, and can emit either visible or infrared beams. The LAM switch is built into the forearm of the rifle.

The standard SAR-21can be fitted with the 40mm under barrel grenade launchers, either US-made M203 or Singapore-made CIS40GL. The SAR-21 RIS can sport a wide variety of add-on tactical accessories,including vertical "assault" foregrip, tactical lights etc.