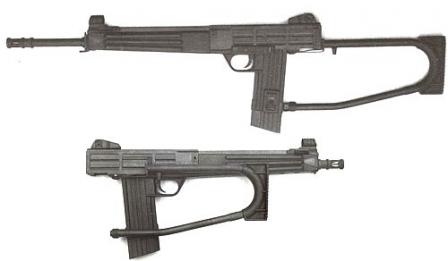 The Inter dynamics AB company of Sweden attempted to enter an assault rifle market with its MKS rifle in mid-1970s. The Interdynamics MKS assault rifle was more or less conventional in respect to materials and technologies, but layout was not conventional, with box magazine serving as a pistol grip. This layoutresulted in shorter overall length when compared to conventional rifles with the same barrel lengths, but seriously compromised ergonomics. Because the standard 5.56mm magazine is significantly deeper 9front to back) than a typical pistolgrip, the firing hand's hold and a trigger reach were far from being comfortable. The MKS rifles never were made in any quantities and deserved its place in firearm history more as a curiosity than anything else.

The Interdynamics MKS assault rifle was a gas operated selective fired weapon with rotating barrel locking. Gas system featured a gas regulator. The receiver was made from stamped sheet steel, magazine housing served as a pistol grip. The skeletonized buttstock folded to the right side to save the space. The L-shaped flip-up rear sight has two range settings, for 250 and 400 meters. Carbine version of MKS rifle featured shorter barrel, otherwise being similar to rifleversion.