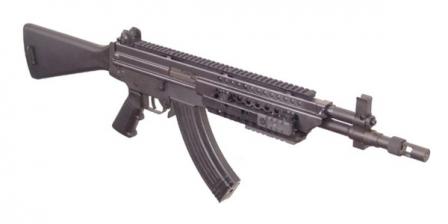 American company Robinson Armament Cointroduced its M-96 Expeditionary Rifle in late 1990s. It was basically a semi-automatic only modular weapon, patterned after famous Stoner 63 weapon system. It was available in several configurations; in about 2002,Robinson Armament also introduced a military / police only RAV-02 rifle, which was based on same design but added selective-fie capability. Over that time,M-96 series rifles were no more than limited production items, sold mostly on civilian US market. Unlike original Stoner 63 design,no belt-fed versions were made in M-96 line.
In about 2004, Robinson Armament unveiled a new design, which, while retainingbasic modular concept, stepped out of Stoner pattern in several aspects. The new XCR rifle was submitted to SCAR special forces rifle trials, which were won by FNMk.16 and Mk.17 SCAR rifles. Since mid-2006, RobArm XCR rifles are sold on civilian US market in semi-automatic only versions; selective-fired versions are available only for government buyers.

RobArm M-96 rifles were built on single,universal receiver, made from stamped steel. These receivers hosted quick-detachable barrels and basic gas-operated actions with long-stroke gas piston and rotary bolt locking. Receivers had mounting points for trigger units on "top" and "bottom" surfaces, and feed unit mounting points on "bottom" side only. In standard rifle configuration receiver is put with gas tube below the barrel, and magazine and trigger units mounted on the underside of weapon. In the "Bren-type" configuration, receiver is turned upside down so gas tube lies above the barrel, and magazine inserts from the top; the trigger unit is installed on the opposite, "bottom" side of weapon. Both trigger unit and magazine feed units also were made from stamped steel. Barrels with appropriate front sight mounts were used for every configuration, and rear sight block was attached to the mounting points on receiver, opposite to trigger unit. Guns were fitted with detachable, solid polymer stocks, and detachable plastic forends / handguards. In"standard" rifle and carbine configurations, charging handle was located at the left side of receiver, and ejection was to the right. In the"Bren-type" configurations, charging handle was on the right, and ejection was to the right (because the receiver was turned "upside down").

RobArm XCR rifle is quite different from M-96. Most important, it abandoned the idea of single receiver with detachable units, that can be turned upside-down. XCR rifle reverted to the more common upper / lower receiver configuration, in which upper receiver hosts removable barrel, gas system, andbasic action with rotary bolt locking. Gas system features traditional gas piston, and four-position gas regulator. Bolt has three locking lugs and locks into the barrel extension. Lower receiver hosts trigger unit and pistol grip,and has an integral magazine housing. Manual safety (which doubles as fire mode selector in "military" versions) is located on lower receiver, above the pistol grip, and can be located on left side only or both sides of receiver.Bolt catch release button is located at the rear of magazine veil, just ahead of trigger guard. Cocking handle is located at the left side of upper receiver, and can be used to assist the bolt closure.
XCR rifles are fitted with side-folding skeleton buttstock. Top of receiver is shaped into integral Picatinny type accessory rail, with three additional rails located around the barrel at 3, 6, and 9 o'clock positions. For more convenient use, these rails can be covered with special polymer panels, that form rifle's forend / handguard. There are no standard sighting equipment "as is",but any compatible open or telescopic and night sights can be installed using Picatinny rail.