Fedorov “Avtomat” action, removed from the wooden stock. Note that barrel is in full recoil position and locking plates are lowered and bolt isunlocked (right locking plate is visible in front of the round cocking handleknob).
Image: Semen Fedoseev 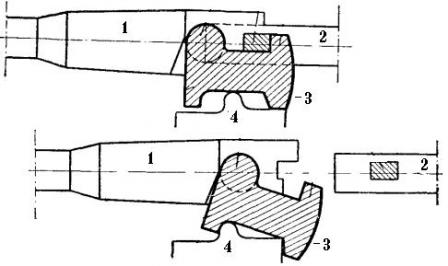 Captain V. Fedorov of the Russian Imperial Army (later – a general of Soviet Army) started development of his first self-loading rifle in 1906. His first rifle was chambered for standard Russian 7,62x54R ammunition, held 5 rounds in fixed magazine and fired only semi-automatically. In this job Fedorov was supported by his apprentice V.Degtyarov (who latter became one of most important Soviet small arms designers of pre-WW2 generation).

First Fedorov rifle entered trials in 1911. In 1912 the Rifle Commission of Russian Army decided to order 150 more Fedorov rifles for further trials, and in 1913 Fedorov submitted a prototype automatic rifle, chambered for his own experimental rimless cartridge of 6,5mm caliber. This new ammunition was slightly lighter that Russian 7,62x54R, better suited for automatic weapons (because of rimless cartridge) and has less recoil. This experimental cartridge fired pointed jacketed bullet weighting 8,5 gram at initial velocity of 860 m/s(muzzle energy 3140 Joules as opposed to 3600 – 4000 Joules muzzle energy of 7,62x54R ammunition). 6,5mm Fedorov rifles were tested late in 1913 with good results; these rifles still had fixed magazines loaded from stripper clips.Further trials and development were stopped by the start of World War One.

In 1915, however, the need for lightweight automatic arms forced Russian Army to order manufacture of Fedorov automatic rifles with detachable magazines of bigger capacity. Since production of the new cartridge was out of question, it was decided to convert 6,5mm Fedorov rifles to Japanese 6,5x50SR Arisaka ammunition which was in abundance, being purchased through Great Britain along with Arisaka rifles. The change of ammunition involved only minimal changes to the rifle, including chamber insert and new range scale for rear sights. In 1916 Weapons Committee of Russian Army decided that it is necessary to order at least 25 000 of Fedorov automatic rifles. In early 1917 orders for Fedorov rifle were limited to 5 000 guns, but as result of turmoil of the revolution and following Civil war only 3 200 Fedorov rifles were manufactured in the city of Kovrov between 1920 and 1924, when production was finally stopped due to decision of Red Army command to standardize on only one cartridge, the 7.62x54R

It is interesting that at the time of initial orders Russian Army considered Fedorov automatic rifles as substitute light machine guns or, in modern Western parlance, squad automatic weapons; although in actual use Fedorov rifles were used as individual armament for infantry soldiers,exactly in the tactical niche of modern assault rifles. Fedorov automatic rifles served with Russian and later with Red (Soviet) Army through WW1, Civil war and until late twenties, when it was decided to retire all rifles and machine guns that used non-standard (other than 7,62x54R) ammunition, and Fedorov rifles were put into reserve storage. The last conflict that saw action of Fedorov rifles was Winter war with Finland in 1940, when some Fedorov rifles were withdrawn from storage and issued to elite units of Red Army.

One important note must be made about the name of Fedorov rifle, which is universally known as “Avtomat” (automatic). This name was apparently devised by commander of the officers musketry courses “Vystrel” Filatov  during mid-twenties. At the time, this term was used to designate any shoulder-fired automatic weapon, be that rifle or submachine gun. Up until now “avtomat” is an official Russian term for automatic weapon. Today this term is most often used for weapons, generally known as “assault rifles”, and therefore Fedorov’s “Avtomat” can be considered as one of the world’s first practical assault rifles. At the time of its peak usage (1918-1924) there was only two practical automatic rifles made in the world which fell into same tactical class – the American Browning BAR M1918 and French CSRG M1915 (which actually inspired Fedorov to convert a semi-auto rifle of his design into a “machine rifle”). Initially BAR and CSRG were intended to be used as assault rifles, with individual soldiers or crews or two firing it from the shoulder or hip during assaults on enemy trenches; however, Browning and Chauchat rifles were noticeably more powerful (comparing muzzle energy of US .30-06 ammunition, French 8x50R and Japanese 6,5x50SR used in Avtomat) and almost twice as heavy compared to Fedorov’s rifle. Therefore BAR and CSRG soon evolved into light machine guns, while Avtomat set the pattern for the whole new class of infantry weapons, which rose to its heights during late stages of WW2 and especially afterwards.

Finally, we shall note that Fedorov’s Avtomat was not without flaws. Its recoil-operated action was sensitive to fouling; early production guns suffered from non-interchangeability of parts, including magazines; disassembly and especially re-assembly was somewhat complicated. Despite these flaws, it was a formidable and historically important weapon, and, ironically, its ballistic properties are very close to modern idea of “ideal” assault rifle and its ammunition.

Fedorov’s “Avtomat” is short recoil operated, locked breech weapon which fires from closed bolt. The bolt locking is achieved by two locking plates, located at either side of the breech. Those plates are allowed to tilt slightly down and up, locking and unlocking the bolt with special lugs.The barrel is fluted to save the weight and improve cooling. Trigger unit uses a pivoting hammer to fire, and separate manual safety and fire selector levers are installed within the trigger guard. The stock is made from wood, with semi-pistol grip and additional vertical foregrip in the front of the magazine.The curved box magazine held 25 rounds in two rows, and is detachable. A special bayonet was attached to the front of the steel heat-shield below the barrel. Standard open sights with tangent rear were installed on the barrel.