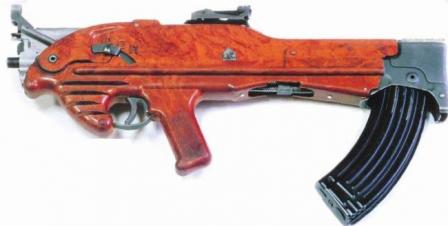 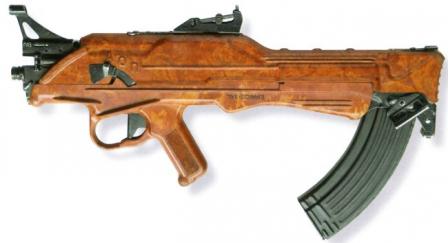 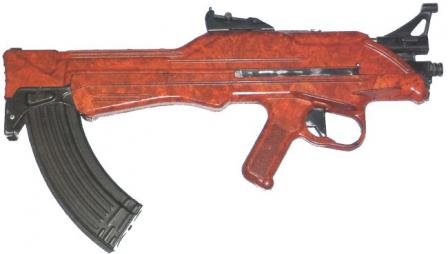 The line of TKB-022 experimental assault rifles is one of most intrigying developments in small arms, made in Soviet Union. In many respects these weapons, designed during early sixties bySoviet gun designer G. A. Korobov were many years ahead of its time.Those guns were simply too advanced for conservative-thinking SovietArmy officers who preferred simple, familiar, proven and reliable Kalashnikov assault rifles over anything else. Regardless of thst, the TKB-022 is well worth mentioning, if just for the sake of curiosity.
TKB stands for Tulskoe Kosntructorskoe Buro– Tula Design Bureau, an arms-designing organisation associated with Tula arms factory (TOZ), which later evolved into the KBP – large and famous arms design and manufacturing state-owned company. Korobov was one of the more advanced designers at KBP, and he always tried to step ahead of its time. In this case, he tried to create a compact weapon,suitable for motorized troops riding in cramped armored personnel carriers (BMP, BTR) or helicopters. Despite very compact size, thisweapon retained full-length barrel (and thus effective range andlethality) of much longer standard assault rifles such as Kalashnikov AKM. In fact, TKB-022 has best barrel length to overall length ratio among most military rifles ever built. During mid- to late sixties Korovov produced several variations of the TKB-022, from TKB-022PM toTKB-022PM5. The last one, the TKB-022PM5, which was produced in 1968, was chambered for then-experimental 5.6×39 ammunition (which latter evolved into 5.45×39). All weapons were tested by Soviet army,but turned down on unpublished reasons (most probably because the gun was simple too advanced for contemporary military thinking, but alsopossibly because no-one at the time could tell for sure if plastic housing would hold its integrity in extreme weather conditions orduring many years of storage or use).

The TKB-022assault rifle is gas-operated weapon with annular gas piston located around the barrel. To achieve minimum length, it is assembled into bull-pup configuration and uses vertically sliding bereech block (bolt), rather than traditional and most common bolt that cycles back and forth. Since the movement of the bolt (breechblock) in this design cannot be used to extract, eject and load cartridges,Korobov developed a special U-shaped rammer / extractor, that strips the frech cartridge from magazine, pushes it into the chamber, then,after the discharge, pulls the fired cartridge case back from the chamber. Upon feeding the next fresh cartridge, the fired case is pushed forward and slightly up, into the ejection chute above the barrel. Spent cases finally fell off the gun above the muzzle. Gun was capable of full- and semi-automatic fire, with combined safety / firemode selector switch located above the trigger on the left side of the gun. The gun housing was made from reddish-brown plastic, with metall structure hidden inside.