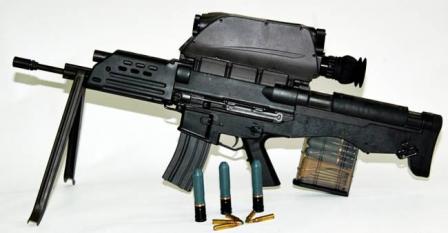 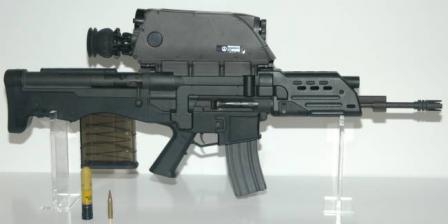 The K11 dual-caliber air-burst weapon was first shown to public in 2009, during DSEI military expo, although information on its development was available since about 2006. The K11 (XK11 during early development) weapon is being developed under direction of the Agency for Defense Development of the Republic of Korea. The K11 shows more than passing similarity to the ill-fated American XM-29 OICW weapon, but it appears that K11 has better chances to see the service – it is believed that first unit of South Korean army could receive the K11 weapons in 2010. This is not surprising, considering the fact that Republic of Korea is among world's leading countries in the field of design and production of advanced micro-electronics, and also has an established defense industry and strong motivation for constant upgrade of military equipment.
As of now, the K11 dual-caliber air-burst weapon is proposed for infantry squad support role, multiplying soldiers capabilities to engage enemy personnel in defilade and soft-skinned vehicles and equipment, using 20mm air-burst grenades with pre-programmed fuse and 5.56mm ammunition for short- to medium range direct fire.

K11 dual-caliber air-burst weapon consists of three major units, linked into one weapon. Those are 20mm multi-shot grenade launcher (which serves as a bone to the system), the 5.56mm automatic rifle with firing controls, and an electronic fire control unit.
The grenade launcher is a manually operated, bolt action weapon that is fed from detachable box magazines. It is built in bullpup layout, with aluminum alloy receiver and titanium alloy barrel. The trigger system of the grenade launcher is mechanically linked to the trigger / selector / safety unit of the integral rifle component. The rifle component is more or less conventional, gas operated, rotary bolt selective-fire weapon which uses M16-type magazines. Its layout is more or less similar to US-made M16 or Korean-made K2 rifles. The trigger unit is a common part between grenade launcher and rifle components, with single safety / fire selector lever providing fire from grenade launcher (single shots) or rifle (single shots or 3-round bursts). The third component is an electronic fire control unit, which includes laser rangefinder, environmental sensors, ballistic computer, and day (optical) and night (IR) sighting channels. The ballistic computer output is fed to the electronic aiming reticle (providing visible point of aim pre-set for proper range) and to the fuse-programming unit in the grenade launcher, which sets the 20mm grenade to explode at specified range, above or to the side of the target, to provide maximum kill effect from explosive fragmenting warhead. At the present time, two types of 20mm ammunition are specified for K11 grenade launcher – the K167 HE air-burst grenade and K168 TP target practice grenade. Rifle component can use any NATO-standard 5.56mm ammunition.