Valmet Model 82 rifle in .223 Remington, with 10-round magazine, right side view 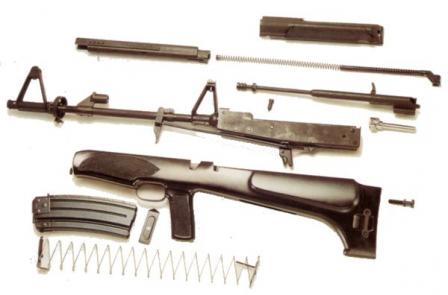 The bullpup Valmet M82 was an attempt to create a compact weapon for Finnish paratroopers without using a clumsy folding buttstock. This was probably one of the first attempts to convert an existing "traditional" rifle into a bullpup layout. Like most such later attempts, it was not successful. The Finnish army, after some testing, rejected it for some unspecified reasons (some unofficial sources said that M82 tended to hit the paratroopers in the teeth with its front sight during a hard parachute landing). Later Valmet produced small batch (about 2,000) of M82 rifles in 5.56 mm (.223 Remington), and sold them on the export market, mostly in the USA.

To save time and money, Finnish engineers decided to keep the well-proven ValmetRk.76/AKM action, receiver and barrel, and save on overall length by putting it into a bullpuphousing. Early prototypes featured wooden stocks, while latter models had a polymer housing which enclosed the receiver. The pistol grip with the trigger was moved to the front of the magazine port, so a long link was introduced between the trigger and hammer unit in the receiver. The safety / fire mode selector switch was kept in the same place on the receiver,placing it far behind the new pistol grip and trigger. The sights were mounted on relatively high posts and set to the left from the weapon axis. There were no provisions for left hand ejection, so the M82 could not be fired from the left shoulder.