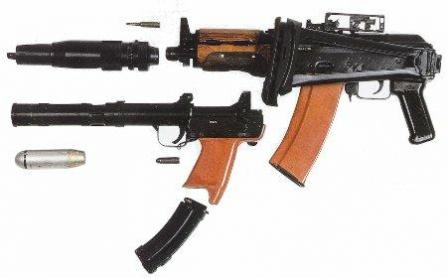 The AKS-74U Short Assault Rifle was developed by Kalashnikov in the late 1970’s from the  AKS-74 Assault Rifle. The “U” suffix means “Ukorochennyj” – Russian for “Shortened”. It was released in 1979.

The AKS-74U was intended as a personal defense weapon for tank, gun, helicopter and other vehicle crews. It was also intended for special operations forces, which required a compact but relatively powerful individual automatic weapon. The AKS-74U has the similar size and effective range of a typical submachine gun. However it has the advantage of using general issue, assault rifle ammunition and magazines, as well as parts interchangeability with the general issue assault rifle, the AK-74.

Since its introduction the AKS-74U has been unofficially known as “Ksyukha” ( a variation of a Russian womens’ name) or “okurok” (cigarette stub). It was issued to various Police and other Law Enforcement forces across the USSR and post USSR countries, including Russia. Interestingly, the AKS-74U is known in the USA as the “Krinkov” – a name, apparently inherited from Afghani Mujaheddin, who named it after a captured Soviet Officer during the invasion and occupation of Afghanistan in the 1980’s.

The AKS-74U is somewhat popular among its users due to its compact size, which allows it to be carried in cars and even concealed under clothes. On the other hand, its effective range of fire is greatly limited by poor accuracy at ranges beyond 150-200 meters, while the fired round itself remains lethal at much greater ranges. The AKS-74U is also known for its tendency for rapid overheating when firing in bursts.

A specialized version of the AKS-74U was developed for the Special Forces (Spetsnaz), which could be fitted with a quickly detachable suppressor and a 30mm silenced grenade launcher model: the BS-1 “Tishina” (“silence”). The launcher uses HE-DP grenades, which are launched using special blank cartridges, stored in the box magazine contained in the launcher’s pistol grip.

It must be noted that the sole Russian manufacturer of the AKS-74U Assault Rifle, the Tula Arms factory (TOZ) has ceased production of this model circa 1997. No new AKS-74U Assault Rifles have been produced in Russia since the turn of the 21st century. Worn out rifles are gradually replaced in service by the slightly larger, but more modern 5.45mm AK-105 assault rifles.

The AKS-74U has only minor differences from the basic AKS-74 assault rifle, which are described below. For a technical description of the AK-74 and AKS-74, please refer to those articles here from the links provided.

AKS-74U has a severely shortened barrel, with the gas chamber moved back and an appropriately reduced gas piston rod. Since the portion of the barrel after the gas port is very short, a special muzzle device was designed, which functions as a flash hider and the gas expansion chamber (to achieve reliable gas operated action).

The front sight base is lowered, and the standard adjustable rear sight is replaced by a flip-up rear sight (marked for 200 and 400 meters distance), mounted on the receiver cover. The receiver cover is hinged to the receiver at the front and flips up when opened ( the original  AK-74 receiver cover is detachable). Otherwise the AKS-74U is a replication of the  AKS-74. It has same controls, folding buttstock, and uses same magazines. The AKS-74U cannot be fitted with a bayonet. Some versions had a standard side-mounted rail for night or red-dot scopes, and these models are known as AKS-74UN.