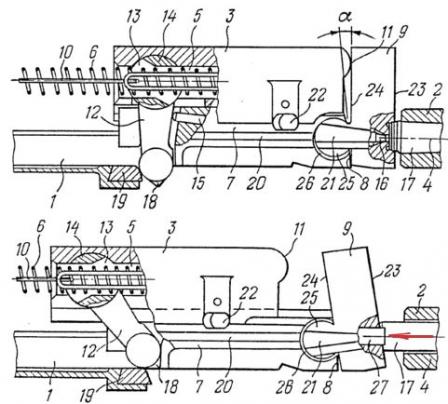 Diagram from original patent, issued to Baryshev for his delayed-blowback action

Anatoly F. Baryshev designed his original delayed-blowback action in early 1960s. His design was very unusual for the time, mostly in the fact that it wasa private effort – a thing, rarely encountered in Soviet Union. Nevertheless, Baryshev managed to find some support in the higher ranks of Soviet Army.Several prototypes were built and tested. New action showed its major advance – a significant decrease in felt recoil, but otherwise it proved to be unreliable under harsh conditions and inaccurate in single shots. Army rejected the design,but Baryshev and his supporters had been trying to promote this design till latenineties. During early 1990s Baryshev also cooperated with Czech company LCZ Group, which manufactured several prototype rifles in calibers such as 7,62×39 and 7,62×51. These rifles were displayed on several military exhibitions, but found no buyers, and apparently were dropped by late 1990s. In the mean time, Baryshev designed an unique large handheld caliber weapon, which fired 12,7x108mm heavy machine gun of 30x25B grenade ammunition (change of caliberre quired change of barrel, magazine and bolt). Because of Baryshev recoil-reducing action, this weapon can be fired from the shoulder, but it still has all drawbacks of all other Baryshev weapons – that is, insufficient reliability and insufficient accuracy in single shots, and accurate burst fire was also all but impossible from such large-caliber but lightweight gun with limited magazine capacity. It must be noted that Baryshev system allows to build lightweight fully automatic weapons in powerful "rifle" calibers such as 7,62x54R or 7,62×51, which are controllable in full automatic fire; but this is the only significant advantage of the system over other, more conventional systems.

Baryshev action is a delayed-blowback system which is fired from open bolt only. Bolt group consists of four parts – bolt with tilting head, inertia piece and locking lever. When gun is fired, bolt group is released and goes forward at once, stripping a fresh cartridge from magazine. At the end of loading cycle, bolt with its head is stopped at the breech, while inertia piece still moves forward, rotating the locking lever and bolt head. The pivoting locking lever strikes the firing pin, and fires the cartridge. Recoil of the shot tries to pivot the bolt head, but this movement is resisted by the mass and velocity of the inertia piece still moving forward. Once the inertia piece is stopped and its movement reversed by the blowback action of the cartridge, it turns the locking lever to disengage the bolt from receiver. Once bolt is released, entire bolt group moves back under residual pressure in the chamber. This sounds complicated as is, and the system never impressed anyone other than few high-ranking officers in Soviet army. In testing, it was found too sensitive in variations of loads, and not sufficiently reliable.