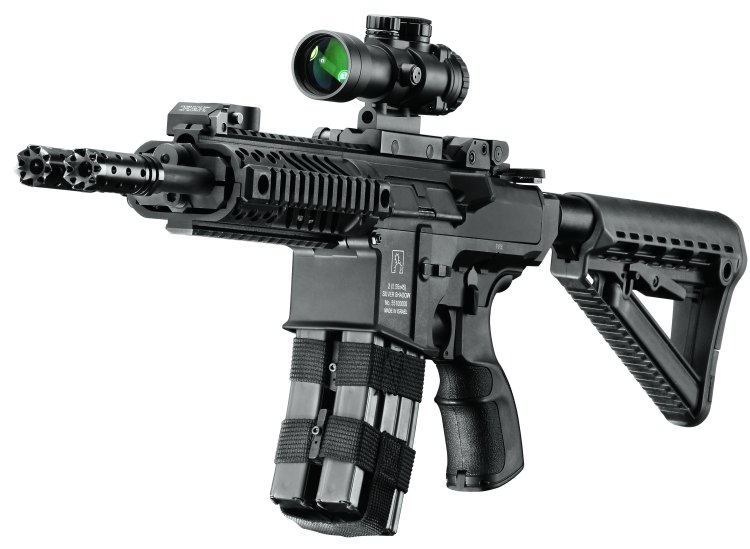 The Gilboa Snake rifle was developed by Israeli company Silver Shadow. Originally conceived by Amos Golan, CEO of the company and designer of the famous Cornershot system. Gilboa Snake rifle was designed along the rather old concept of “salvo” fire. This concept, previously developed and tested in USA under SPIW program in 1950s and 60s, called for weapon that fires several bullets at the same time or in very quick bursts, to increase hit probability and provide faster target incapacitation per single “observe – aim – pull the trigger” cycle. Several experimental multi-barreled automatic rifles were developed and tested in USA and elsewhere, but the Gilboa Snake seems to be the world’s first multi-barreled salvo-type assault rifle to achieve production status.
The basic select-fire Gilboa Snake rifle is, obviously, intended for military and law enforcement Special Forces; however, Silver Shadow also designed a “civilian-legal” version of the Snake rifle, which has two triggers side-by-side, each controlling its own barrel, and each capable only of semi-automatic fire.

The Gilboa Snake rifle has two barrels, mounted side by side in a single receiver, made of aluminum alloy. In select-fire version, both barrels are connected to a single gas block with manual gas regulator. Single short-stroke gas piston runs above and between the barrels, to simultaneously and synchronously cycle two bolt carriers with M16-type rotating bolts. In “civilian” version each barrel is equipped with its own independent gas block and piston.  Each bolt is designed to eject spent cases to the side, so rifle ejects to the right and to the left through two symmetrically located ejection windows. Military version of the Gilboa Snake rifle has single trigger and three position safety / fire selector, which allows for single “double taps” (one shot from each barrel simultaneously per single trigger pull), and for full automatic fire (also simultaneously from each barrel). Ammunition is fed from two M16-type magazines, independently inserted into twin magazine housing below the rifle. The Gilboa Snake rifle is equipped with proprietary return springs system, located inside the upper receiver above the bolt carriers, so it can be equipped with detachable and/or side-folding shoulder stocks of various designs. Sights of various types are installed using a centrally located Picatinny rail that runs above the receiver. Additional accessories such as tactical lights, lasers and foregrips can be attached to the 3-rail handguard.