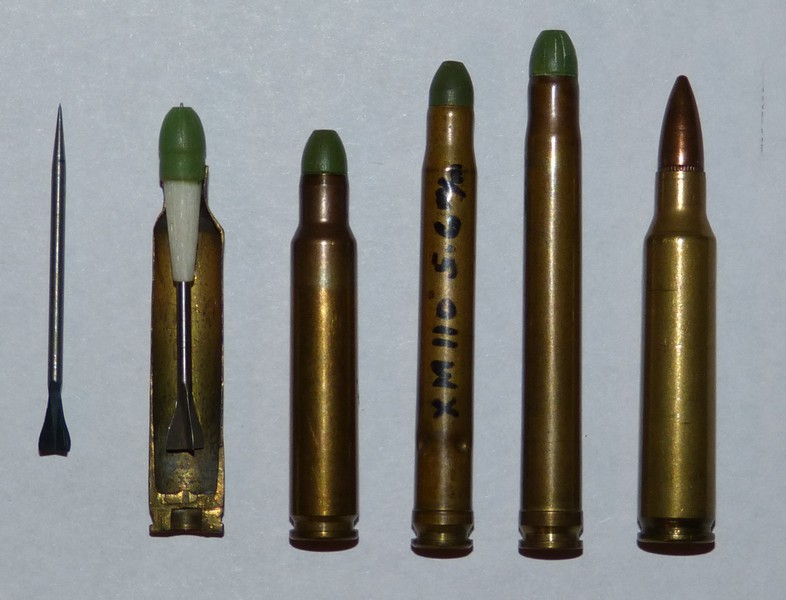 The “Special Purpose Individual Weapon” (SPIW) program was a very ambitious and largely unsuccessful program, run by US Army between 1959 and 1974.  Its goal was to equip US infantrymen with a new rifle, which would provide highly effective automatic fire against point targets (enemy soldiers) plus area denial fire (by using an integral, multi-shot grenade launcher firing FRAG grenades). The basic concept of the SPIW, which was originally (and more accurately) designated as All-Purpose Hand-Held Weapon (APHHW) has its roots in the SALVO R&D program that was conducted in USA during the previous decade. Among other findings, the SALVO program suggested that a significant increase in hit probability could be achieved through a  “shotgun” effect, by firing several small but fast projectiles at once or in a short, rapid burst and with controlled dispersion, as to compensate for slight aiming errors. One way to achieve this “shotgun” effect with burst fire was to use so-called “flechette” ammunition, which was loaded with small-caliber arrow-like projectiles (“flechettes”) loaded into bore-riding sabots. Such projectiles could achieve high muzzle velocities without generating excessive recoil.

Typical flechette projectile, used throughout SPIW program, was a tiny steel arrow about 4 centimeters (1.6”) long, 1.8mm (0.07”) thick and weighting about 0.65 gram (10 grain). Its stamped four-fin tail measured across at about 5mm. It was loaded into multi-segment puller sabot, made of plastic, and achieved muzzle velocities between 1,200 and 1,400 meters per second. Rounds were designed to be fired through smooth bore with nominal caliber of 5.6mm (.22 inch).

The main driving force behind flechette ammunition was the AAI Corporation, which developed the first single-flechette round to be used in early SPIW rifles, the XM110. This round was unique because it featured a “piston primer” design, necessary to operate the proposed SPIW rifle being developed by AAI. Since the concept of piston primer operation always had its opponents (quite rightfully), the Springfield Armory teamed with Frankford Arsenal to develop their own flechette-firing round with a conventional primer, which was designated as XM144. The third early type of ammunition proposed for SPIW program was a highly unusual triple-flechette “tround”, a polymer-cased ammunition of roughly triangular cross-section, loaded with three flechettes to be fired simultaneously through three separate bores. This system, developed according to the patents of American designer David Dardick was initially promoted by the Harrington & Richardson (H&R) gun-making company.

In 1962, the US Army approved formal requirements for the proposed SPIW guns, which, among other things, included 60-round magazines as standard for flechette-firing ammunition and multi-shot 40mm grenade launching capabilities, all within quite strict weight limitations (10 pounds / 4.54 kg for rifle and grenade launcher together, with 60 rounds and 3 grenades loaded) and with only 4 years to develop the new system so it can be adopted as a “Standard A” infantry rifle.

First to drop out was the entry from H&R, a three-bore 10.8 kg (24 lbs) monstrosity, which was judged as “unsafe to fire” and ruled out by the US Army in 1964. It fired triple-flechette “trounds” taped together from a 20-round container at a rate of about 500 rounds (1500 projectiles) per second, with a three-shot semi-automatic grenade launcher mounted under the barrel.

Springfield Armory initially set to develop a “convertible” rifle with common barrel / receiver group and two sets of accessories, which could be easily assembled into conventional or bullpup layout. However, by 1964 this modular design was abandoned in favor of the bullpup weapon. It was a gas-operated rifle, firing from 60-round tandem magazine, with three-shot semi-automatic, magazine fed grenade launcher mounted under the barrel. It fired XM144 single-flechette ammunition from a smooth-bore barrel with a cyclic rate of fire about 1700 rounds per minute, in full-auto or three-round bursts. Later on, Springfield engineers switched to conventional rifle design with 50-round four-stack magazine made from plastic and located in front of the trigger guard.

AAI submitted its piston-operated rifle, which fired XM110 ammunition from 60-round drum magazines, and had an unusual 3-shot 40mm underbarrel grenade launcher with a 2-round tubular magazine located straight behind the barrel. The XM110 ammunition also was unusual as it featured “piston primer”, set deep into the base of the cartridge case. Upon discharge, its primer was pushed back by powder gases, thus unlocking the breech of the rifle through retracting firing pin. This made the rifle simpler, but, at the same time, made each cartridge even more complicated and expensive (and also longer and heavier than a conventionally primed round of same ballistic properties). AAI SPIW rifle fired at 600-700 rounds per minute in full auto or 2,300-2,400 rounds per minute when set to 3-round burst mode.

The Winchester SPIW rifle fired same XM144 ammunition as Springfield gun, from a 60-round drum magazine. It was a gas operated design using a differential-recoil scheme (its receiver and barrel were allowed to recoil inside a polymer gun housing / stock). In all modes it fired at moderate 700 rounds per minute, and featured a 3-shot semi-automatic grenade launcher with blow-forward barrel.

First tests of the three entrants (sans the rejected H&R system) were carried out in mid-1964, with disappointing results. Neither system was satisfactory in terms of accuracy and reliability, though AAI and Springfield entrants fared a tad better than Winchester one. What was worse, there was no economical way to produce saboted flechette ammunition even in its simplified XM144 form, far less so for piston-primed XM110. Also, flechettes were too small to carry any amount of tracer mixture, and their lethality was questionable. Requirement for integrated multi-shot grenade launcher made things even worse – heavy and bulky magazine-fed launchers made rifles clumsy to handle, with nose-heavy balance; requirement for a single selectable trigger for both rifle and GL made trigger linkage overly complicated and was conductive to operator errors under the stress of combat.

As a result of first trials, only two teams were allowed to continue development, from AAI and Springfield. Both went through several improvements, but neither came close to required capabilities, which, with the benefit of the hindsight, can be politely regarded as “overly optimistic” or, rather frankly, “outright unreachable”. Both SPIW designs faced same basic problems, most of which were quite serious. To name a few, stringent weight limitations resulted in weapons that were too fragile and insufficiently durable and reliable. High rates of fire put additional stress on the gun, magazine and cartridge case designs, not helping reliability either. Saboted flechette cartridges posed a number of challenges of their own, including high unit costs, issues with sabot design, safety concerns over fragmenting sabots (larger fragments had enough energy to wound friendly troops near the line of fire, smaller fragments produced dust that was dangerous to the shooter when breathed in). Lethality of the tiny flechette projectiles, their abilities to penetrate various covers and foliage made their combat effectiveness questionable, and their accuracy in single shots was still insufficient. After several years of development, political ramifications and unsuccessful tests, the SPIW program quietly wound down in 1968. Instead, in 1969, the US Army initiated the Future Rifle System (FRS) program, which took off where SPIW program culminated, starting with AAI XM19 Serial Flechette Rifle (SFR). AAI XM19 SFR was based on AAI SPIW rifle, simplified and using slightly improved XM645 piston-primer ammunition. During early 1970s, the SFR gave the way to the XM70 Serial Bullet Rifle, which was mechanically similar to XM19 but fired more conventional ammunition with “micro-caliber” 4.32mm bullets.


Flechette ammunition also later tested during American ACR program of the 1980s. Overall results were somewhat better than of the SPIW program, partly due to more realistic requirements and partly due to evolution of designs, but still not sufficient to warrant changeover from conventional bullets to saboted, subcaliber flechette projectiles.